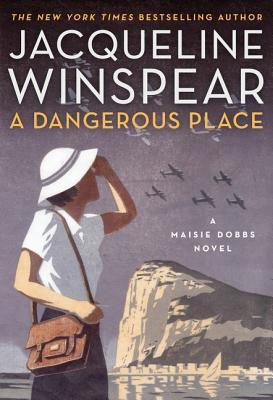 Summary:
Four years after the end of the previous book (Leaving Everything Most Loved), we catch up with Maisie, on her way back to England at last. Devastated by great loss, she is unable to face a return to family and familiar places, and leaves the boat at Gibraltar, where she finds herself investigating a brutal murder.

Review:
Jumping ahead in time four years gave me a jolt, and seems to have shifted Maisie's story onto another plane. Yes, this is still a mystery, but Winspear is moving more and more into novel territory. The real investigation in this story is into Maisie's own state of being, which is fragile in the extreme in her grief--and into the condition of Europe on the brink of WWII (it is 1937), and more particularly, Spain in the grip of the Civil War.

Winspear spins a gripping tale in which the personal--both Maisie's loss and the lives touched by the death of the man whose body she finds--and the political share importance. The questions raised about Britain's role in the mess that was the 1930s are interesting and well-researched, leading to a sense of foreboding. At the same time, it is fascinating to watch Maisie gain strength and confidence from her old calling, untwisting the threads that lead to murder.

Recommendation:
I was at first taken aback by the changes that Winspear wrought in Maisie's life, and the feel of the book is different (especially from the earlier mysteries in the series). But in the end I felt that it was also a more complete and complex book for that reason (not that the series has ever felt shallow; these mysteries have all been more novelistic and less formulaic than most). It was painful to see Maisie, who has always been such a strong character, reduced to serious mental and physical weakness. But it was good to see her find her way out of it to some kind of recovery.  I recommend the book both to followers of the series and to those who simply want to read a good period novel (though a reader new to Maise Dobbs may occasionally feel they are missing something).

Full Disclosure: I borrowed A Dangerous Place  from my library, and received nothing from the author or the publisher in exchange for my honest review. The opinions expressed are my own and those of no one else. I am disclosing this in accordance with the Federal Trade Commission's 16 CFR, Part 255: "Guides Concerning the Use of Endorsements and Testimonials in Advertising."