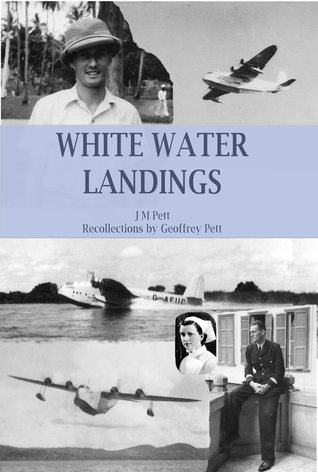 Summary:
This memoir, narrated by Geoffrey Pett and edited by his daughter, JM Pett, takes us to Africa between the wars (as in, the 1930s, between the Great War and WWII). Geoffrey worked for Imperial Airways (later British Air) establishing the routes that served Africa, primarily with the Flying Boats. His account of establishing a number of bases and then the effect of the outbreak of WWII on the system offers a unique glimpse into another world.

Review:
Full disclosure first: I have worked with JM Pett (Jemima Pett) on a couple of projects (see the Bookelves Anthology), so I was primed to like the book. But the following review is my honest opinion.

White Water Landings is not the sort of slick memoir we are seeing a lot of these days, nor is it a celebrity tell-all. It is an honest account of a time and a place that I, for one, knew little about, and it has a very authentic voice. Because the narrative was originally created orally, there remains a certain "oral history" feeling that I think serves the story very well, but Ms. Pett has provided the right amount of editing to make it read well and professionally. Geoffrey Pett wasn't anyone famous in a broad sense, but he did good and important work, and was clearly recognized and respected for it in his field--a fact that comes through in just the right way when he recounts with pride successfully meeting great challenges, or mentions that a suggestion of his was adopted by the higher-ups.

The narrative is well-structured and well-edited, with Mr. Pett's voice coming through very clearly and a meticulous attention to fact and detail. While Geoffrey Pett may have remembered some things inaccurately (he recorded the story many decades after the events in the book), Ms. Pett has done her research to attempt to correct errors or--which I think is just right--to indicate where official accounts differ from Geoffrey's memory, and let the reader decide.

One thing Geoffrey himself mentions as a bit uncomfortable: this is a story of a time when British Colonialism was thriving, and the circumstances and mindsets of the time reflect it. Some events and attitudes may grate on modern sensibilities, though this is certainly colonialism light, by comparison to many stories we all know. Those attitudes and assumptions were part of their time, and this book helps us to understand that time.

Recommendation:
I enjoyed the story very much, and can recommend it to history buffs and particularly anyone interested in the history of flight. It combines a detailed view of what was done with a certain  authenticity that, for me, made it more compelling than a plain history.

Full Disclosure: I purchased my own copy of White Water Landings, and received nothing from the writer or publisher in exchange for my honest review.  The opinions expressed are my own and those of no one else.  I am disclosing this in accordance with the Federal Trade Commission's 16 CFR, Part 255: "Guides Concerning the Use of Endorsements and Testimonials in Advertising."