We were fortunate this year to be able to spend our spring break in Death Valley National Park, among other places. I thought I'd share some of the photos and a bit of history and geography.

Death Valley National Monument was created in 1933. In 1994, the Monument was greatly expanded and became a National Park. It was that expansion that brought the Eureka Dunes into the park (I think that before that time they were either National Forest or BLM--Bureau of Land Management). Coming into the Park brought much-needed protection, as the dunes are a surprisingly vulnerable habitat, with several endemic species. While much of Death Valley proper is famously at or below sea level, the Eureka Valley is at about 3000', with the dunes rising about 650' above that.

Aside from having a spectacular setting, the dunes are among a handful world-wide that "boom"--create a deep humming or roaring sound, almost musical, when the sand on the upper slopes slides. This happens only when conditions are just right, and scientists are still arguing over not only just what causes the booming, but what constitutes "just right" conditions. Whatever the physics of it, on this visit we experienced the best booming we've encountered, there or elsewhere.

Naturally, the dunes are in a windy spot. After all, sand dunes are created when the winds carry dust and grit from elsewhere, then deposit it all in a spot where conditions change, usually the head of a valley. That's what you have here. Hills and striped cliffs surround the dunes, and the wind blows on the minimally developed camp area. The wind blows a lot. For the record, the road is also in awful shape. Prepare to spend a half hour or 45 minutes driving the 10 miles from the Big Pine road (which is an hour from Big Pine. Where there may or may not be cell service). Carry a spare AND a pump. You can't call AAA from out there. Camping at the dunes is the only way to see them at their best, but it's not for wimps.

Sorry to talk so long. Now for the photos.

Looking up the dunes before sunrise. For the best photos, get an early start! 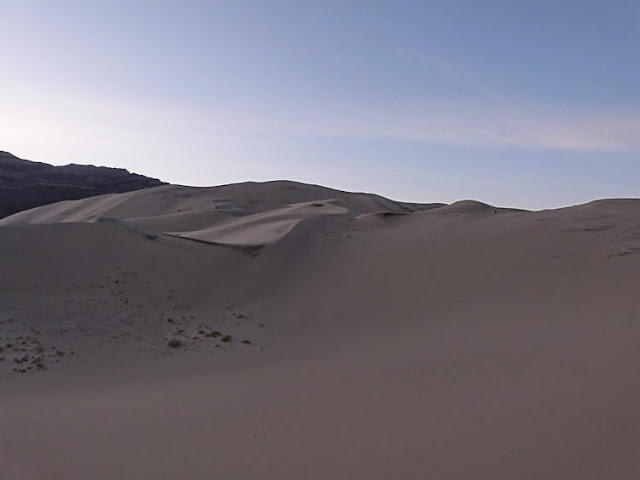 There are, as mentioned, a number of endemic plants that live only on or around the dunes. That's one reason why the regulations about nothing but feet on the dunes are so important. We saw evidence when we were there that someone had ridden an ATV onto the lower part of the dunes. We can only hope they were caught and taught why that's criminal.
You have to get up early to enjoy many desert flowers. Most of the primroses bloom in the night, and wilt by mid-morning.
Looking back down into the valley bottom from high on the dunes.
Work hard enough, and you can be on top of the world! Climbing the dune isn't easy, but it is up on those high ridges that the booming happens, when you start sand sliding down the steep sides of the knife-edge.

To the south of the main dunes, there is a secondary dune field. I'm not sure why the dunes deposit short of the end of the valley. No doubt it's something about how the air eddies around the mountains.
Surprisingly, a number of mammals live on the dunes, in addition to a lot of beetles.
Get the photos of tracks in the early morning, before the wind comes up again, and other people trample them.

Sometimes it's just about patterns and the art of nature.