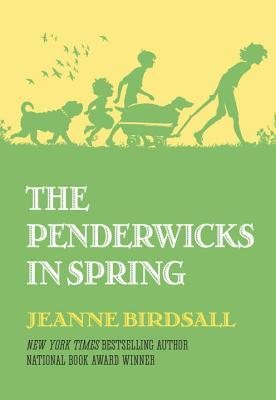 Publisher's Summary:
Springtime is finally arriving on Gardam Street, and there are surprises in store for each member of the family. Some surprises are just wonderful, like neighbor Nick Geiger coming home from war. And some are ridiculous, like Batty's new dog-walking business. Batty is saving up her dog-walking money for an extra-special surprise for her family, which she plans to present on her upcoming birthday. But when some unwelcome surprises make themselves known, the best-laid plans fall apart.

My Review:
I have been following this series since I stumbled on the first book (published 2005) not long after the second was published (2007). We read the first book to our boys, and we all loved it. By the time I got the second book, the boys had moved on to other kinds of books, but I devoured it and waited with bated breath for the 3rd (2012). Now, at last, Ms. Birdsall has come out with a 4th book in the series, and we have to make some adjustments.

For three books, the focus was on the three oldest Penderwick sisters, who were just at the beginning of the teen years. Along the way, their long-widowed father remarries, but nothing much changes in the family from the reader's perspective. Now we have jumped ahead about 5 years, and our eyes and ears on the family are Batty's, with a bit of young Ben--the step-brother who joined the family when Mr. Penderwick married, and with whom the very young Batty of earlier books was much taken. (Note: it must be very strange for Ben, the lone male with 5 sisters).

The older girls still matter, and their stories are still important, but they are all filtered through Batty's perspective, and are secondary to her story. I had just finished listening to the audio of the first book, so I had a particularly hard time at first with the idea of Batty being nearly 11, and having the half-sophisticated reasoning skills of the child approaching her teens. She still feels younger than Jane feels in the first book, though they are the same age, though in many ways she is clearly mature and responsible (she is most like the Older Penderwick Sisters when caring for her 2-year-old sister).

I think each book has delved a little deeper into serious issues (the first one used the girls' motherless status more as a plot point than as something that matters; by the 3rd we are dealing with their best friend Jeffrey's abandonment by his father, a rift that is not handled tritely). Now we get to the full weight of the family history, and it is Batty who has to bear that weight, and the effect on her is profound, and depicted so well by the author that I could feel the weight of it myself while reading. The book still has much of the light and delightful feeling the first captured, but there are some real things going on here, and I'll not deny I shed some tears on Batty's behalf.

Ms. Birdsall tied up a lot of loose ends at the end, but I think not too much so to allow for a 5th book, which I dearly hope will not take her another 3 or 4 years to write.

Recommendation:
Read the series in order, but READ THE SERIES! Kids and adults. Just read it.
Full Disclosure: I checked The Penderwicks in Spring out of my library, and received nothing from the writer or publisher in exchange for my honest review.  The opinions expressed are my own and those of no one else.  I am disclosing this in accordance with the Federal Trade Commission's 16 CFR, Part 255: "Guides Concerning the Use of Endorsements and Testimonials in Advertising."