I didn't expect to be posting on May 1, and if I did I suppose it ought to be a bit of fiction (did that on Tuesday).  I had a number of requests for reviews in early May, and I couldn't pass up this one when it was offered. Since the book's release date was April 28, I wanted to get it out as soon as possible. 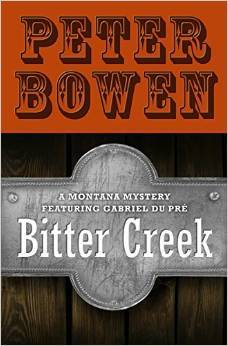 Publisher's Summary:
When he awakes one morning to find a strange car parked across the street from the house where his girlfriend, Madelaine, lives, Gabriel Du Pré knows that trouble can’t be far behind. Lieutenant John Patchen has come to Montana to persuade Chappie, Madelaine’s son, to accept the Navy Cross. But first Du Pré and Patchen must find the wounded marine, who was last seen drinking heavily in the Toussaint Saloon. They locate him soon enough, disheveled and stinking of stale booze, but a sobering visit to a medicine man’s sweat lodge reveals a much greater mystery: the unsolved case of a band of Métis who were last seen fleeing from General Black Jack Pershing’s troops in 1910 before disappearing.

Strange voices within the sweat lodge speak of a place called Bitter Creek, where the Métis encountered their fate. To find it Du Pré tracks down the only living survivor of the massacre, a feisty old woman whose memories may not be as trustworthy as they seem. But when Amalie leads Du Pré to Pardoe, an out-of-the-way crossroads north of Helena, he senses that they are about to uncover long-buried secrets. Discouraged by the US military, their lives threatened by locals whose ancestors may have played a role in the murders, Chappie, Patchen, and Du Pré bravely pursue the truth so that the victims of a terrible injustice might finally rest in peace.

Review:
This series is full of profanity, characters who drink and smoke and drive fast, and lots of politically incorrect opinions--and I love it. Okay, I wish Du Pre would stop smoking, because those things are going to kill him, if the drinking and driving doesn't do it first, but it's a great ride in the meantime. Bowen creates a seductive mix of humor, mystery, suspense, and adrenaline that keeps me reading every time, and this one does not fail.

In general I'm no fan of the supernatural, but again, the story is compelling and the mysticism of the mysterious Benetsee fits the setting and the culture. The voices heard in the sweat lodge start it all off, and a certain sensitivity to the historical ghosts help Du Pre find his way, but there is also a very real and modern murder to be solved through the exercise of the little grey cells. The threads that lead us to the killer are a little thin in my opinion, but with care I was able to track them back--so that is probably about right. I'm still not sure there wasn't at least one leap of faith required, but as that is followed up by some evidence and a confession, it does work.

This is a good and much-awaited addition to the Du Pre canon, though I wouldn't have minded a little more fiddle music beyond the one key song that provides the clue to the 1910 massacre. I do hope he's not losing his love of music. The author continues to weave the land and the culture into the heart of the story in a way that makes both come alive.

Recommendation:
Not for the easily offended, but for those who can handle some cussing and some hearty condemnation of values you may hold dear, the story is compelling and the characters engaging. I don't consider it the strongest of Bowen's mysteries, but it is a pleasure to have Du Pre back. If you like mysteries that have a strong and essential setting, read this series.

Full Disclosure: I was given an electronic ARC of Bitter Creek by the publisher, but received nothing further from the writer or publisher in exchange for my honest review.  The opinions expressed are my own and those of no one else.  I am disclosing this in accordance with the Federal Trade Commission's 16 CFR, Part 255: "Guides Concerning the Use of Endorsements and Testimonials in Advertising."
Posted by Rebecca M. Douglass at 12:00 AM