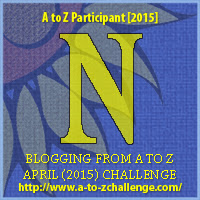 The letter "N" brings us the state of Nevada, because it is nearly all mountains and valleys!

I struggled with this one, because all I could think about was the Sierra Nevada mountains. Then I got to thinking: Sierra Nevada means "snowy mountains." And even though it's the snow referred to by nevada, not the mountains, somehow that name got applied to the state of Nevada, which more accurately would be the state of Sierra, given its mountainous nature. Most (though not all) of the state is contained within the "basin and range" province, with range after range of mountains separated by valleys--and no drainage to the oceans. The Sierra Nevada mountains, in fact, form the first range of the Basin and Range province (and appear to be the source of the state's name).

Extremely reductively, the basin and range topography is created by the tilting of rows of blocks. One side drops, creating a valley, and the other side rises, creating a range. A relief map of Nevada shows many (nearly) parallel lines of ranges, especially though the middle of the state. Some of the ranges are low, some rise to impressive heights (and do get snow in winter). The highest point in Nevada is Boundary Peak, which is smack on the border with California, and rises to 13,146'.  But it is a bit out-classed by the Sierra.

For my money, the best peak of the basin and range country is Wheeler Peak. At 13,065', it's nearly as tall, and stands more impressively on the eastern edge of the state. What's more, it has one of very few forests of bristlecone pines, among the oldest living things on earth.

Two books I can recommend on Nevada and the Basin and Range.  First, in my opinion, if you want to drive across Nevada and really appreciate the geography, drive US 50. And while you do, get hold of a read a copy of this book: 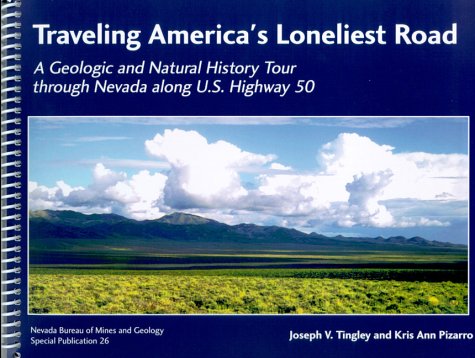 This spiral-bound guide provides fascinating nuggets of information about geology, geography, and history (with a geologic bent; but since most of the history of the area is a history of mining it fits), keyed to the mile markers on the highway.

The other book I will recommend to anyone who wants to know more about the geography is Basin and Range, by John McPhee. In fact, if you like geology, I will recommend anything he has written, and if you can find them, the audio versions of many of his books, narrated by Nelson Runger, are phenomenal.
(Published 1982 by Farrar, Strauss and Giroux, 240 pages).


Then, just to show what I mean about Wheeler Peak, a couple of photos:

Email ThisBlogThis!Share to TwitterShare to FacebookShare to Pinterest
Labels: A to Z Challenge, basin and range, John McPhee, Loneliest Road in America, Nevada, US 50, Wheeler Peak