I'm a little late with this. . . so sue me. I was out hiking again (coming soon: photos from California's Sierra Nevada).

One last Peruvian photo essay.  After all our trekking, we opted against walking to Machu Picchu, instead taking the planes, trains and automobiles approach.

At the end of the Huayhaush trek we rode our bus straight back to Lima, where the party split--two to fly home, the other 6 of us to leave the next morning on a flight to Cuzco. The bus ride was long, but had its own scenic interest, from the agricultural to the dismaying.
The road runs along the coast for a very long way, with huge chicken farms here and there. The workers lived in scattered shacks on the completely bare sand dunes. It really doesn't seem possible to live there, where nothing grows and all water must be imported.
The flight to Cuzco next day was fairly short. Cuzco is an ancient city which has made itself over very firmly as a tourist mecca. The central market, though, was loud, colorful, and smelly, and clearly more patronized by the locals than tourists, probably with good reason.
Many streets were narrow, and ancient Inca walls might show up anywhere. 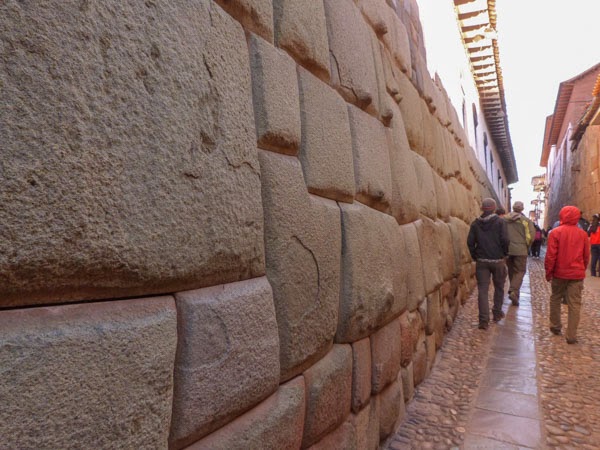 The Inglesia de Santo Domingo was built right atop the Incan temple of Qoricancha (after looting, of course).  The lower walls are the work of the Inca, with the Spanish church above.

Before heading to the Sacred Valley and Machu Picchu, we spent a day visiting the local sites and sights, including the ruins at Saqsayhuaman, a huge complex and the site of one of the most devastating losses the Inca suffered at the hands of the Conquistadors. From that defeat the Inca began the retreat to their hideout at Machu Picchu.
We took a private bus and driver to Ollantaytambo, in order to visit other key sites, notably the salt pans at Salinas, above Urubamba, which have been in use since Incan times. Many pans have been in the same family for generations if not centuries.
Logistics for getting to Machu Picchu are not trivial. After our day in the van, we were deposited in Ollantaytambo, where we spent the night, leaving before breakfast to catch the train to Aguas Calientes. I could only admire the cafe, as there wasn't time to get anything.
The train brought us to Aguas Calientes (at the base of the mountain bearing the ruins) mid-morning. Once checked in to our hotel, we had lunch, and headed for the mountain. The area is apparently famous for hairless dogs--this one was wearing a shirt, though frankly I thought it was plenty warm out!
Most of a mile from town, we began the climb, roughly 1400' (and as many stair-steps) up from the town. After our time in the high mountains, the altitude (about 8000' at the start of the ruins) was nothing, but the heat and humidity took a serious toll.

There is also a museum at the base of the climb, worth the visit, as we did (though we'd have done better to climb first and do the museum after, as the ruins close at 4:30!)
We trotted out to the Inca bridge, where they deliberately built a gap into one of the approaches, forming a drawbridge, as they needed only remove the boards across the gap to make it nearly impossible to approach.
We then headed up to the Sun Gate, where the Inca Trail enters the ruins. You can get off the train a few miles from Aguas Calientes and hike the last bit of the trail to enter this way, which seems like a worthwhile idea. 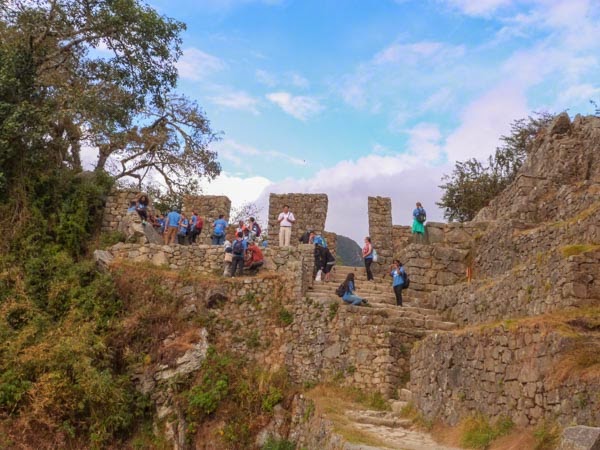 Shortly before closing the sun broke through and gave us a look at the city and Huayna Picchu, the classic photo. The second day, our sons climbed the trail to the top of that peak, though due to a mix-up the adults in the group were unable to get tickets. 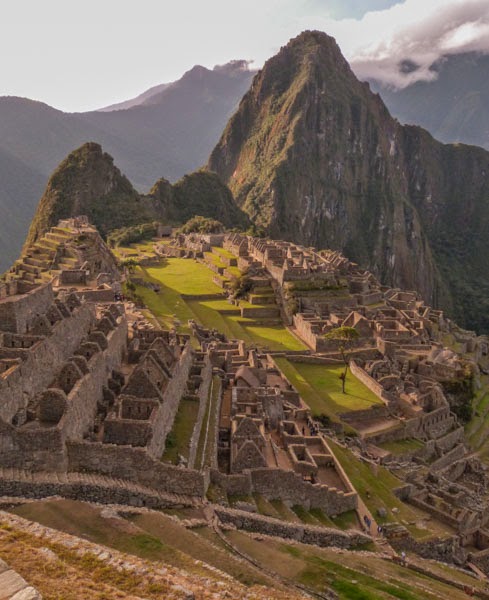 Since we couldn't do the standard climb, the adults in our group chose on Day 2 to do the much longer climb to Montana Machu Picchu, at over 10,000'.  This made a LOT of climbing for most of the group, who walked up from town. I rode the bus to the base of the ruins that day, as I'd spent part of the night throwing up (remember the comment about the heat and humidity? Dehydration is no fun). The bus ride was less effort, but extremely terrifying, and those with weak hearts might do better walking.

Amazing views from the mountain top, and a limited number of people make the climb, admittedly with good reason--2000' of stairs is no joke.
Back down in the ruins, I was charmed by the animals! Lawn care is provided by a herd of llamas.

The llamas are domesticated animals, but the biscachas (or viscachas) are "wild"--habituated, but not domesticated. Relatives of the chinchilla, they look a lot like rabbits but have long furry tails. They live all through the ruins, which make a great habitat for animals that naturally live in rock piles. 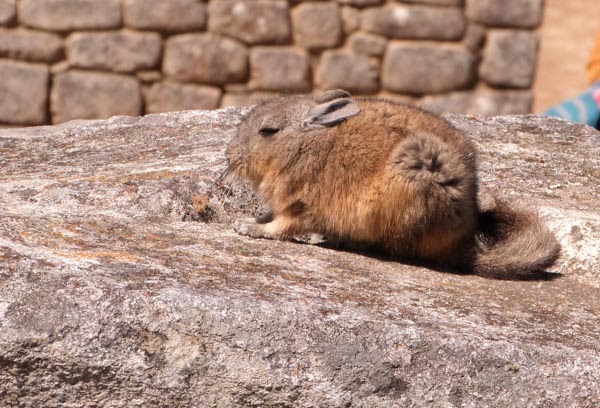 Lots of miles of hiking, and all over now. . . my husband's boots didn't quite stand the gaff, and he took great pleasure in depositing them in the trash before boarding the train to begin the long trip home! 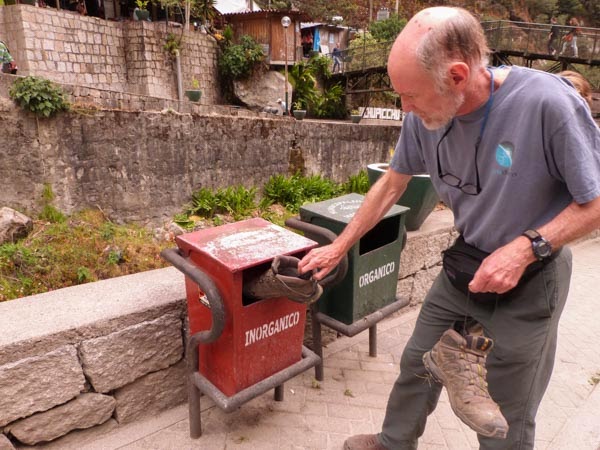 Back down from the ruins by early afternoon, we boarded the train at 3:30. Our driver picked us up in Ollantaytambo at 6, and we bused back to Cuzco that night, arriving for a very late dinner. After a night spent, in the case of some of us, in much digestive distress (you really don't want to know more), we flew to Lima, spent another night, and finally flew home, with an 8-hour layover in Mexico City. Home has seldom looked so good! (Pity my brother-in-law, who had to get up next morning and drive 3 hours before he was home, making for four days on the road from Machu Picchu to his own bed).

To see the rest of the story, follow the links from my Photos and Travel page!