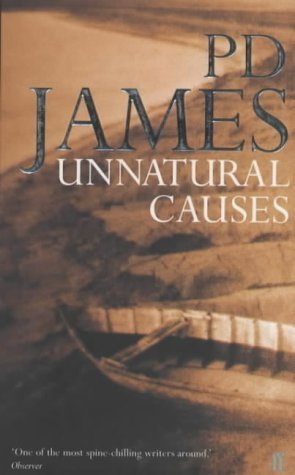 Summary:
In this 3rd book about Scotland Yard's Adam Dalgliesh, the DI has come to spend a quiet holiday with his Aunt Jane. But no sooner has he arrived than the neighbors show up to complain that one of their number, mystery writer Maurice Seton, has disappeared. And then the local police show up to say he's been found. . . dead and mutilated. Dalgliesh has no official standing on this case, but he can't keep out of it, and naturally finds his way to the solution before the local police, but not before there is another death.

Review:
The 1967 publication date explains a great deal about this book, which did feel dated in some ways. Jame's style is always a bit formal and distant (rather like Dalgliesh, actually), so as I was listening I wasn't sure about the time period, but felt that the story had a tone that was out of step with modern novels. It did seem to be set in another era, and several things make a great deal more sense in that context!

Not surprisingly (James is one of the masters of the genre), the plot is complex, but not byzantine, and hangs together beautifully, with all the clues present in retrospect, though I didn't see it coming. There was one annoying point when Dalgliesh tells the local police the key to everything, and sends them off to find it, but we (the readers) are not told what it is. That always strikes me as a bit unfair, and frankly even if I had been told what the thing was I wouldn't have figured out who did it, so she might as well have played straight with us.

Ms. Dellaporta's narration is excellent, and adds to the enjoyment of the story.

Summary:
As long as you don't have any issues with older mysteries with a more restrained style, this is an excellent yarn. I have tended to read this series in random order as the books cross my path, but I suspect a perusal in order would reward the reader, who could not only see the characters develop, but watch Britain and the Yard transform from the 60s to the early 2000s (without aging the characters any significant amount). If you are a fan of the classic mystery, have at it!

Full Disclosure: I checked  Unnatural Causes  out of my (digital) library, and received nothing from the writer or publisher in exchange for my honest review.  The opinions expressed are my own and those of no one else.  I am disclosing this in accordance with the Federal Trade Commission's 16 CFR, Part 255: "Guides Concerning the Use of Endorsements and Testimonials in Advertising."
Posted by Rebecca M. Douglass at 12:30 AM