Trekking the Cordillera Blanca, Part I

In lieu of my usual Friday flash fiction, for the next several weeks I will be posting photo-essays of our recent trip to Peru. I posted a summary of the whole trip and a few shots from our pre-trek dayhikes here.  This week, as titled: Trekking the Cordillera Blanca. It's Part I, because it was a 10-day trek and I'm hanged if I can do the whole thing in a single post of reasonable length.

The main purpose of our Peru trip was to do two major treks, in the Cordillera Blanca and the Cordillera Huayhuash (both are fairly popular and well-established routes). We did the treks with full support--not our usual approach, but it was a nod to age, altitude, and the local economy. Despite feeling a little bit lazy for doing it that way, we have no regrets. The passes were high, the knees are old, and we would have suffered carrying full loads over that route. Having someone else do the cooking was a real luxury for me, the chief cook on our usual trips! And being brought warm wash water and tea in my tent first thing every day was an enjoyable novelty.

Most treks in the area are based out of the city of Huaraz, as it is the main population center in the area, and has many tourist services, including restaurants that are safe for our pampered First-World guts. We enjoyed our stay there (at Mi Casa B&B, clearly catering to trekkers and, during our visit, research scientists), including shopping at the local artisan markets.  Alpaca wool products are all the thing--very light and warm, as well as beautiful.

The 5-hour drive from Huaraz to our trailhead left the pavement early on, and climbed over Portachuelo de Llanganuco. At 15,700' the pass offered views of Chacraraju (left) and Yanapaqucha mountains, as well as of Huascaran (highest in Peru but not shown here). 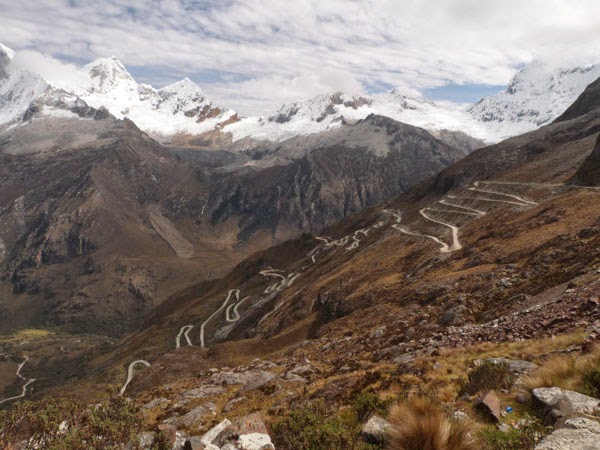 The trek started in the "town" of Vacaria, where we ate our sack lunches and watched the crew scramble to pack up all the gear necessary for 8 gringos and 6 staff (1 guide, 1 cook, and 4 wranglers, including a head wrangler and a gofer, who ended up being frequently deployed to keep up with and guide "los Tres Muchachos"). 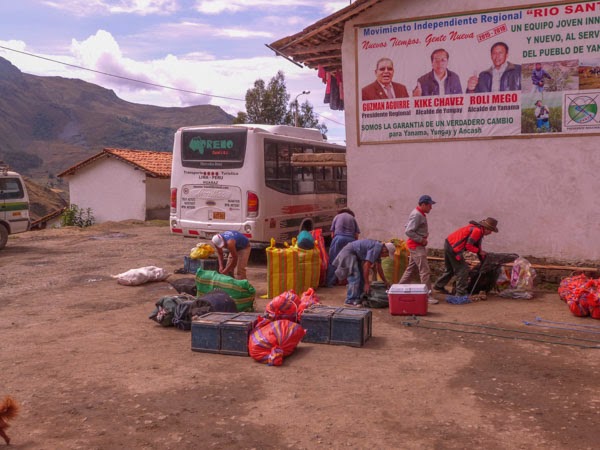 The first lesson on leaving the trailhead was that we have to go down in order to go up. Both because of geographical necessity and because the trails were there first of all to get the locals from town to town, they descend into every valley and climb back up around the base of the long ridges. So we began the trip by dropping several hundred feet from Vacaria into the valley and the town of Colcabamba. 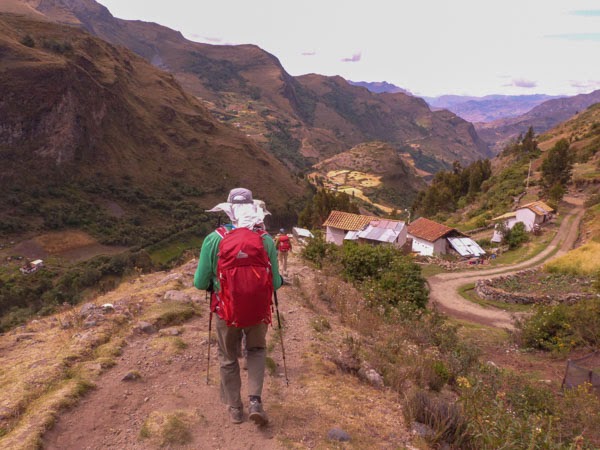 Below we find Los Tres Muchachos--my two teen sons (on either side) and their 24-year-old cousin (in red shirt) in a typical attitude. These three were always out in the lead, and often (especially the older two) to be found climbing things. Our guide quickly realized that they needed their own guide, and deployed the young wrangler-of-all-work to keep up with them. At times, he sent the 56-year-old cook ahead with the boys, and he (a man of the hills with 30+ years as porter and cook for mountain expeditions) kept them humble by hiking them into the ground. 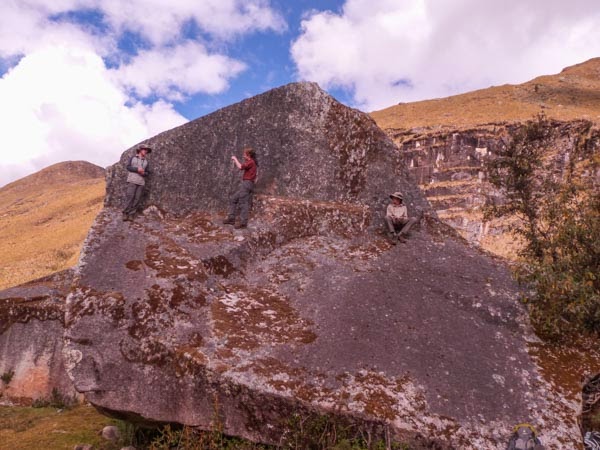 Our second day was a dayhike (well, we did move camp a short distance as well) to Punto Union (15,600'), part of the very popular 4-5 day Santa Cruz trek route.  We just enjoyed the summit and turned back to return to our longer route. 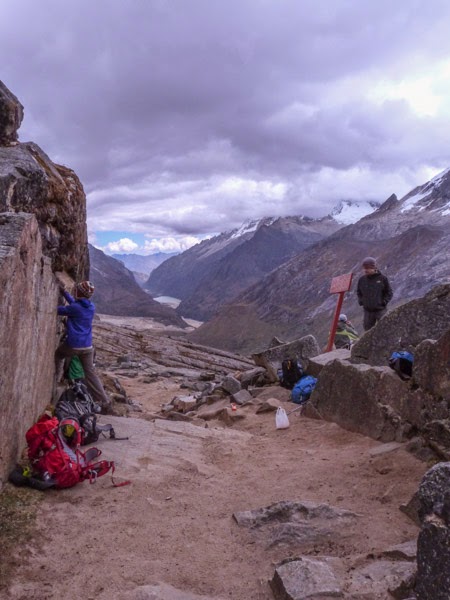 A typical camp scene (Camp 2). The clouds became a common afternoon feature, too, with rain often falling between tea time (5 p.m.) and dinner or beyond. We were lucky, though--it never rained on us while we were hiking! And with meals served in the large tent (to the right of the even larger rock), we could eat comfortably whatever the weather. Daily festoonings of the tents with laundry were also normal; we washed up whenever we could and (thanks to the donkeys) had enough clothes to let things take two or three days to dry. 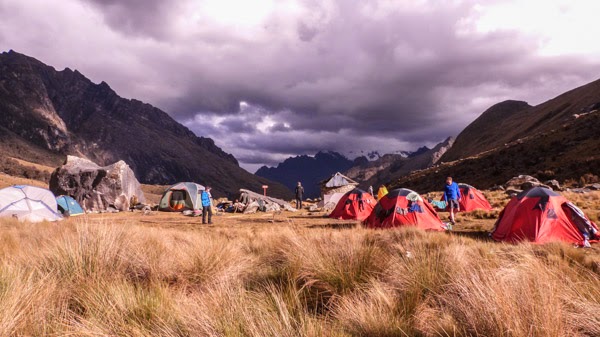 Mornings could be glorious, however.  Here we are, having breakfast al fresco at Camp 4, in the Pishgopampa valley. It felt a bit weird to sit around at a table in the middle of such a place, but was undeniably more comfortable than sitting on the ground, especially given the amount of cow poop and donkey dung on the ground. 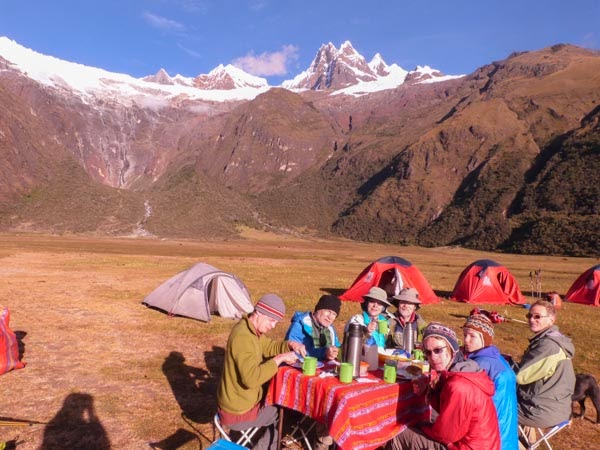 Morning sun could be fickle, though.  On Day 3, we woke to sun, climbed to fog and mist, and then enjoyed several hours of mostly sun. 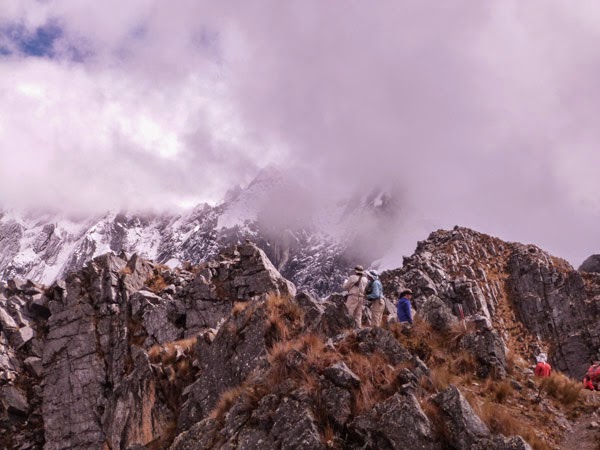 It was probably at this spot, on the third day, that I realized to what extent I could kiss my knees goodbye! For the record, the only days (besides the first half-day) we didn't go over a pass. . . we went over two. 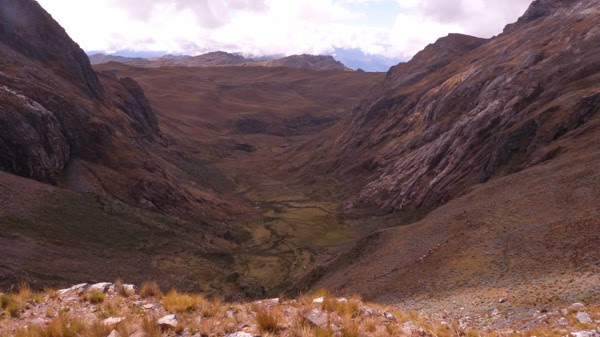 Halfway through the trek, we dropped (after going over two passes) into Huilca, where two or three houses constituted the "village," with far more sheep and alpaca than humans. There were a few people about, including this man weaving at a back loom. 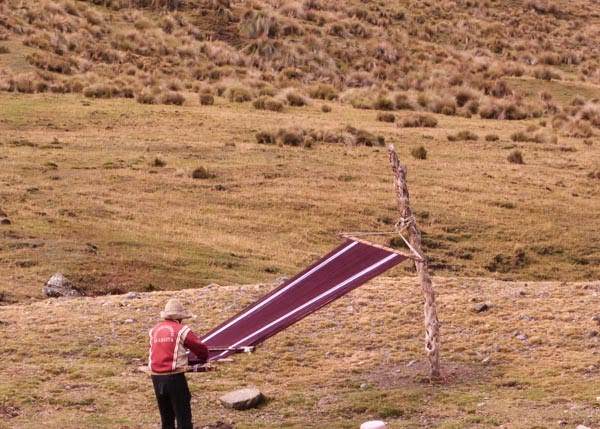 A pair of alpacas discussing the visitors in their pasture. 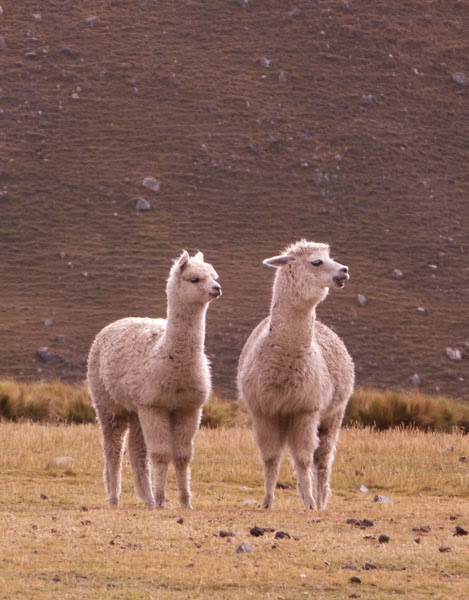