After being away so long, I have a lot of catching up to do, and it will be a while before my posts are completely back on schedule.  But I have finished a number of books in the last two months, so I'll be trying to get review up for those!  Here's the first, from a book I finished just before we left for Peru. 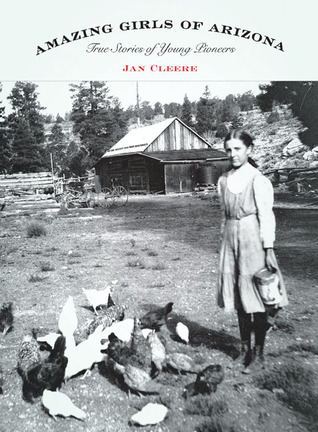 Summary:
The book is a collection of a dozen brief biographies of girls and women who lived (or live) in Arizona. Arranged chronologically, they range from Olive Ann Oatman, who survived  an Indian attack in 1851 and was a captive for many years, to Ruth Okimoto, who was born in San Diego but was sent to an internment camp in Arizona during WWII at the age of 5.

Review:
Books like this are a particular passion of mine, and that means that I can afford to be critical.  Granted that this one appears aimed at younger readers (something I decided while reading it; as far as I could tell in the shop it was in the adult section), it still was disappointingly shallow. One thing I look for in such books is text drawn from letters and diaries, and there was very little of that. There was also a great deal that felt reconstructed (thoughts and feelings), which is okay in one sense but not what I want. Finally, in the case of some of the girls, I felt that the 'amazing' part was a bit of a stretch.

There were a couple of girls whose memoirs would be worth reading. Eva Antonia Wilbur-Cruce sounds like she was a real character all her life, and she did pen a book (A Beautiful, Cruel Country) which I may want to read. And I'd love to read more from Edith Jane Bass, who grew up guiding early tourists around the Grand Canyon (though she died suddenly at age 28 and I don't think wrote anything more than an occasional letter).

Overall, this book serves as a decent introduction to the many lives of girls and women in the 19th and early 20th Centuries in Arizona, a state that didn't move too quickly into the modern era. But to get a real feel for the lives of pioneers, there are more and better books, both for adults and younger readers.

Recommendation:
For kids who need something specific to Arizona, or for die-hards like me who read everything available on or by pioneer women and children.

Full Disclosure: I purchased Amazing Girls of Arizona with my own money and of my own volition, and received nothing from the writer or publisher in exchange for my honest review.  The opinions expressed are my own and those of no one else.  I am disclosing this in accordance with the Federal Trade Commission's 16 CFR, Part 255: "Guides Concerning the Use of Endorsements and Testimonials in Advertising."