Ready for another round of photos? I've made some progress through the collection, and I'm ready to resume the narrative, begun here.

When last seen, we were camped at Huillca with the alpacas (alpaca poop made a nice change from cow plops). The next day (Day 5, I believe) saw us (as usual) getting up in the morning and climbing up over a pass, with views to match. The (young) guys switchbacked up out of sight quickly, keeping up with Juan, our amazing cook and high-speed guide. This was a two-pass day, with an easy climb of Mesapata Pass followed by a longer and harder climb to Caracara Pass.

Mealtimes were something we really looked forward to. This particular bit of fruit wasn't quite what we were expecting, however.﻿ It's some kind of relative of a passion fruit, but we aren't quite sure what. 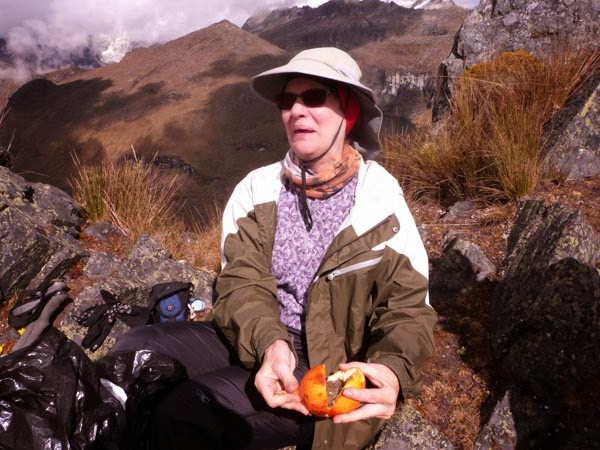 A fair bit of lounging about seemed an appropriate response to mealtimes, summits, and any of a number of other excuses. In fact, on a trip like this, when not actually hiking, lounging about is the primary activity. Staring at the scenery of course is what we'd come for, so it mades sense.

The sixth day, and we were descending to our layover near Alpomayo. We can see the glacial lake (thus the lovely turquoise color) behind the moraine. Once again, we see too that we have to go down. A long way down.﻿

Clouds kept hiding the peaks, but they also made for great light at sunset. Since this moraine had failed catastrophically in the 1940s, flooding the valley and washing out a nearly-completed hydro-election dam down on the Santa River, I did think a bit about where we were camped!
After two nights in our scenic camp, and a dayhike to get a closer look at the lake, we had to move on. But we had great views behind us at the mountain, as we descended the deep glacial Quebrada Alpomayo past Incan ruins.

This was a tough day. After descending the valley for several miles, we turned and began a relentless 2000' climb to the first pass of the day, Hatun Ventuna. This was the point where various people's minor illnesses and fatigue began to show--the gap between the Tres Muchachos and the last of the old folks was huge! But we all eventually made the summit, and we had traded Alpomayo for a new set of stunning mountains. 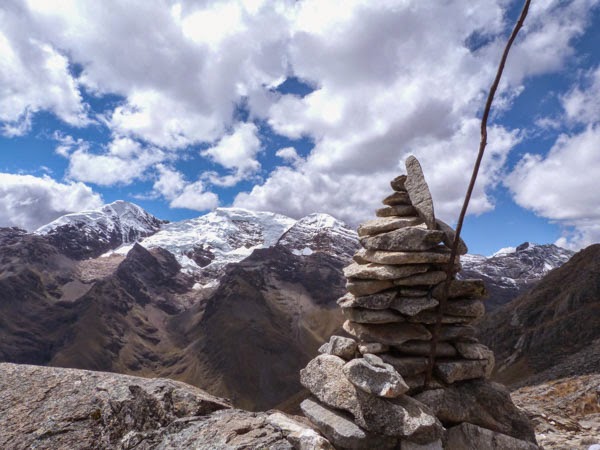 Of course, having rested on our laurels, and eaten our lunch, we had to drop several hundred feet and climb a thousand to the second pass of the day, Ventana. In between, we passed a little cove full of these giant lupins, native only to the Andes. 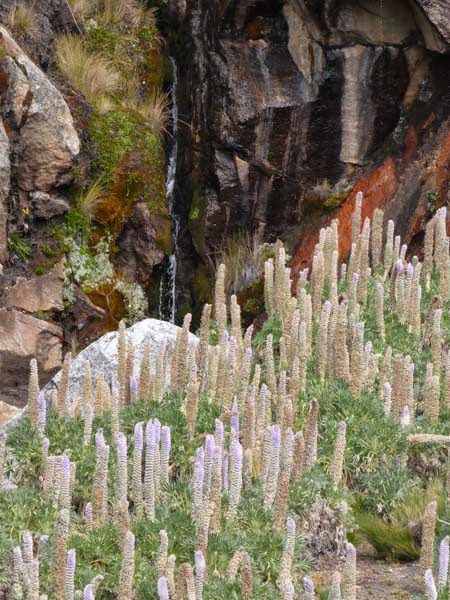 Finally, after a day that went on far too long for me, and just in time for afternoon tea, I reached our next-to-last camp. Tucked into a small area next to a dam, we shared our space with several buildings and a pair of trekkers from Colorado, just starting out in the other direction.

What the campsite itself lacked in aesthetics, the lake and mountains more than made up for when sunset moved in.
The last two days were a long, long way down, into the valley of the Santa River. Even though we didn't have to hike all the way to the bottom, it was a tough descent!
I can't let this go without giving some credit to the guys who did the heavy lifting--our team of 11 burros and a packhorse, not to mention the wranglers. They got to walk home when we were done, too, but without all the gear and coolers. Well, the two wranglers who took the donkeys back rode, but still--no horse trailers for these guys. So it takes two days to get home? Vamos!

The Alpomayo Circuit was an incredible hike, and inspired all sorts of responses from our group. . . 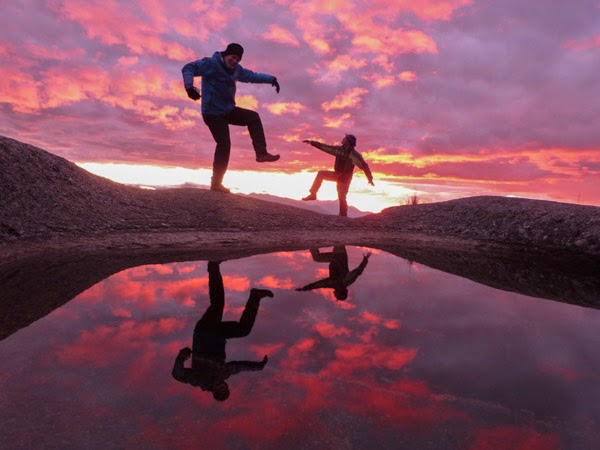 These two posts don't even come close to doing the trip justice, and my husband's photos are better. Even better, for those who really like good photography, will be my brother-in-law's photos, once he has them up on his website, Photoseek.com (I just checked yesterday and they weren't there yet, which is no surprise given the size of the job!).

And, for those who want more: next week, I start the report on our second trek, the Huayhaush circuit.