Non-fiction Review: The World Until Yesterday 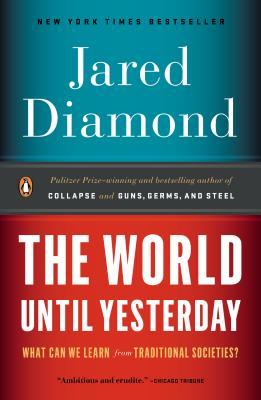 Title: The World Until Yesterday: What Can We Learn from Traditional Societies?
Author: Jared Diamond
Publisher: Penguin Books, 2012.  512 pages
Source: I bought it for my brother and then kept it, as he'd already gotten it.  Some people are impossible to buy for!

Review:
I like non-fiction, if it's well-written and engaging, and I particularly like history.  You've probably noticed I like books about adventures and adventurers.  And so far, I've mostly liked Jared Diamond's thought-provoking works that delve into history in search of better understanding of how societies work (and don't work).  But I have to admit that The World Until Yesterday, while containing much that was of interest, just didn't grip me (note that it sat on my "currently reading" shelf for months).

The book is a study of traditional societies and what we can learn from them in several key areas: War (and peaceful relations), treatment of young and old (think child-rearing issues), understanding and responding to danger, and a final section on Religion, Language and Health.  The idea is good, but for me, the execution was somehow lacking.  The book lacked the compelling narrative force that I found in, for example, Guns, Germs, and Steel or Collapse.

As I considered why I felt that way, I realized that I had very different reactions to different parts of the book, so that was one clue: the book doesn't feel as unified as his other books.  It seems like it lacks a clear destination, as it were.  But maybe I also found some areas more relevant than others.

The opening section on War took a long time to get through, in large part because I felt like there was less to learn there.  That might not be fair--Diamond talks about the societies that have strong forces for mediation and negotiation, just because they understand that the consequences of carrying even minor disputes to their extremes can be year or generations of blood feuds.  We can definitely learn from that, though it has to be approached very differently in a modern society.

I was more interested in the section on child-rearing, because I'm pretty sure that our standard 21st-Century US approach isn't very good (this includes my own, by the way, though I have tried to replicate some of the feral childhood I enjoyed).  The discussion of treatment of the elderly, on the other hand, was more of an explanation of why some societies reject and even kill their old people while others treasure and revere them.  Of course we can't help noticing that we're created a society that doesn't have much room for the old, especially the old and poor or those too old to do much of anything.

Tied closely to both war/violence and treatment of the young and old is the section on responses to danger.  Again, there are good points here, and the anecdotes Diamond uses to support them make for interesting reading.  Many of us are very aware that our US society has a lot of trouble recognizing real danger, so that we take no end of precautions to prevent our children from being snatched from the street by strangers (highly unlikely), then feed them snacks loaded with sugar, fat, and salt (risk factors for diseases that are really horrible and very real dangers).

The discussion of religion was interesting, because I never thought of religion in quite those terms before (the evolutionary advantage of religion?  How did irrational mystical beliefs ever come into being?).  I could recommend this section for anyone who sometimes thinks about things like that.

Finally, the section on heath and nutrition felt obvious and superficial.  We know that stuff about diet, and while I was interested in the added understanding for why traditional people are so subject obesity and related diseases when exposed to a Western lifestyle, the discussion of nutrition and healthy eating would probably better be left to an expert in that field.

Ultimately, I thought that Diamond made some good points, shared some interesting history and anthropological insights, but that the point of the book could well have been conveyed in a more concise fashion.  It almost felt at times as though the author had some really cool bits of history and stories that he wanted to share, and had to hunt for a framework to hang them on.  I still think it's a useful book, and Diamond writes well.  But it does not measure up to the others of his books that I've read.

Recommendation:
For those who really like Diamond's work, or who have a special interest in traditional societies.  For others, I'd recommend rooting around in it for the parts that interest you, and not sweating reading the whole thing.

Full Disclosure: I purchased my copy of The World Until Yesterday, and received nothing from the writer or publisher in exchange for my honest review.  The opinions expressed are my own and those of no one else.  I am disclosing this in accordance with the Federal Trade Commission's 16 CFR, Part 255: "Guides Concerning the Use of Endorsements and Testimonials in Advertising."
Posted by Rebecca M. Douglass at 12:30 AM