Just looking around, and decided that in honor of my picture book, A Is For Alpine, and the start of summer vacation, I'd do a little photo essay on what little kids do when backpacking.  These were taken on a 6-day trip in the Wind River Mountains of Wyoming, in 2005 when our boys were 6 & 7 years old.

What do kids do in the woods?


Wherever they are, they'll find swords and have a sword fight.   Right in the trail.  Don't imagine you're going anywhere in a hurry!  Taking kids to the woods will change your perspective and priorities. 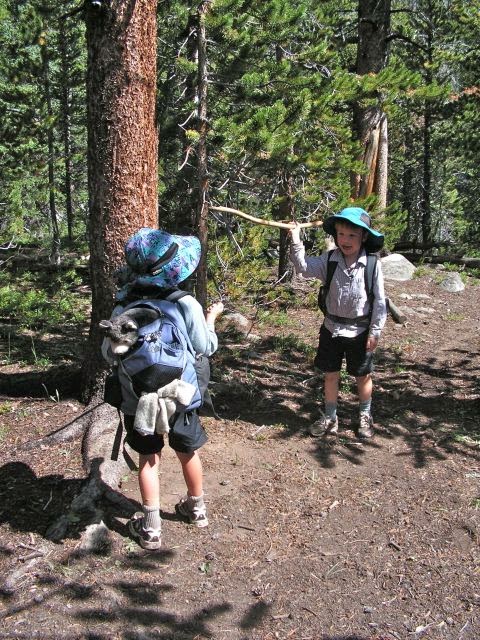 ***
Kids will stop and snack.  Also right in the trail, and more often than you would have thought possible.  Note that Mom's pack is larger than the kid.  That's also something kids will do--increase your pack size!  Taking your kids hiking will make you a stronger and fitter person. 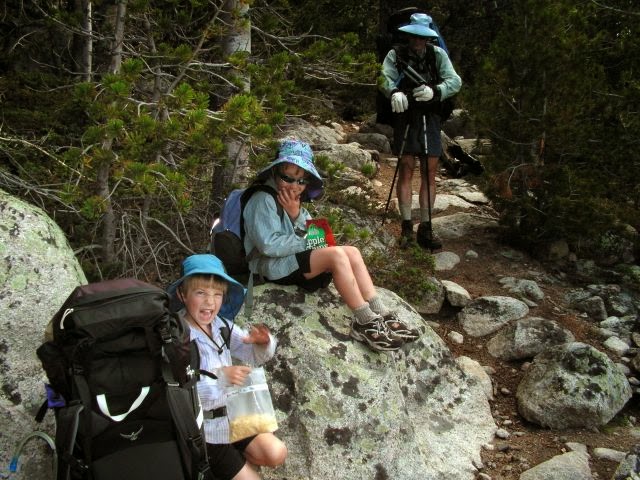 ***
Kids will explore.  You did bring dry clothes for them, right?  Because kids and water?  It's pretty much a magnetic pull. 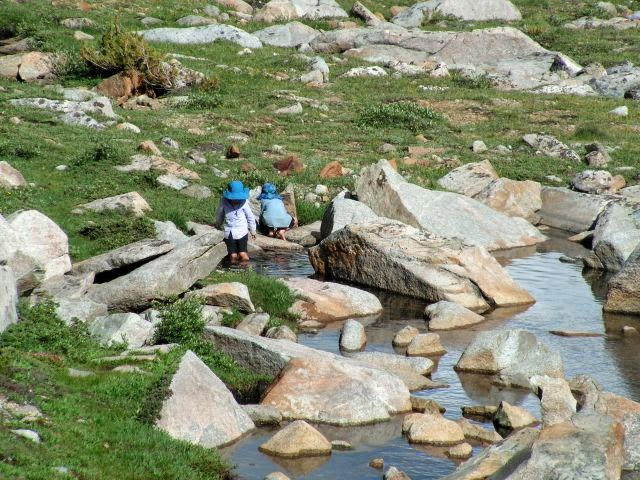 ***
They'll find treasures.  You didn't know that old bones were treasure?  You must not have boys.  Or you've not taken them outdoors.  Every stick is a weapon, and as Calvin said (that's Calvin as in Calvin and Hobbes), there's treasure everywhere. 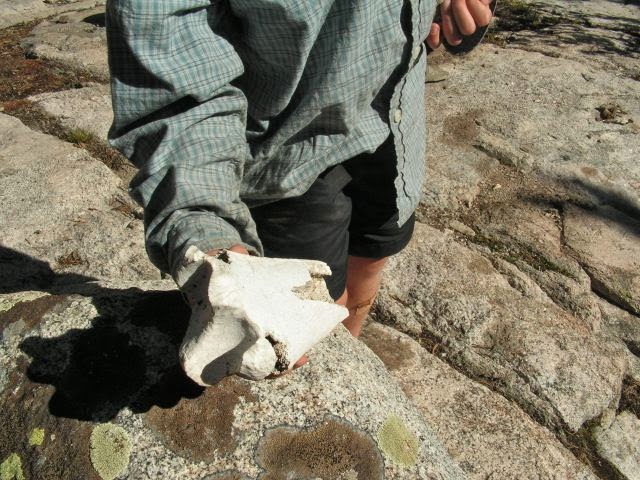 ***
Like mother, like sons.  Sometimes all they want is a pad of paper and a pen or two for some quiet play--to do in the woods just what they'd do at home. 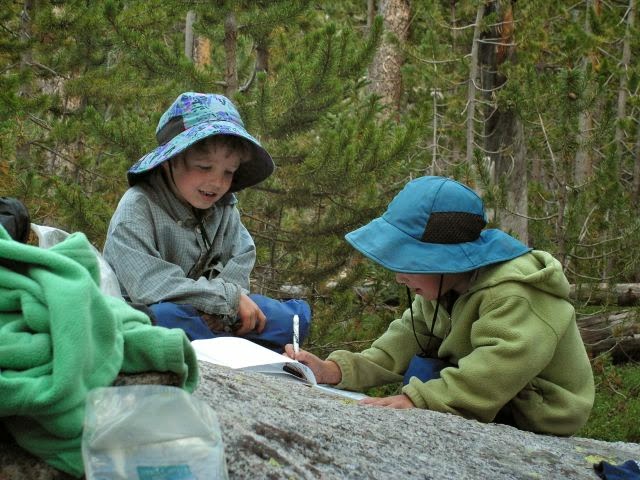 ***
And sometimes they sit and eat in the best seat in camp.  Mom thought that was her seat! 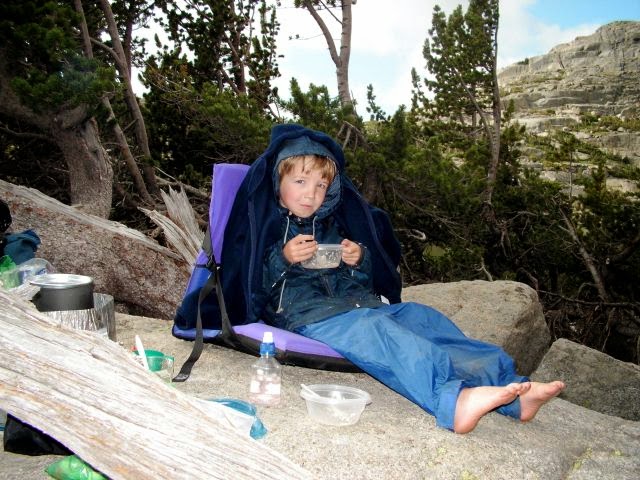 ***
Sometimes they'll just sit, because being outside can be tiring. 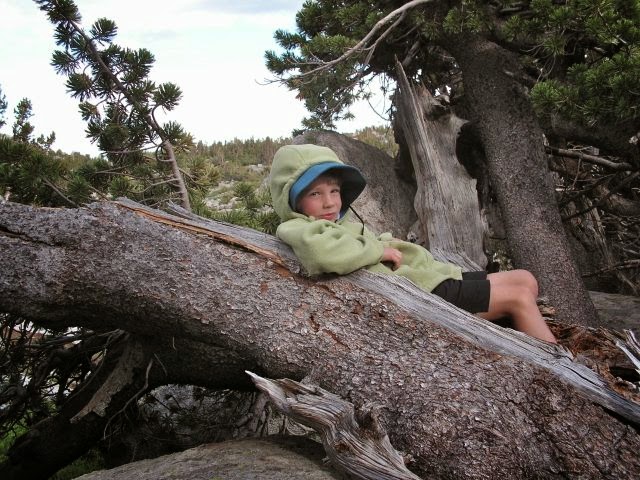 ***
Eventually they'll crawl into their tent, and into warm sleeping bags, and listen to a story. 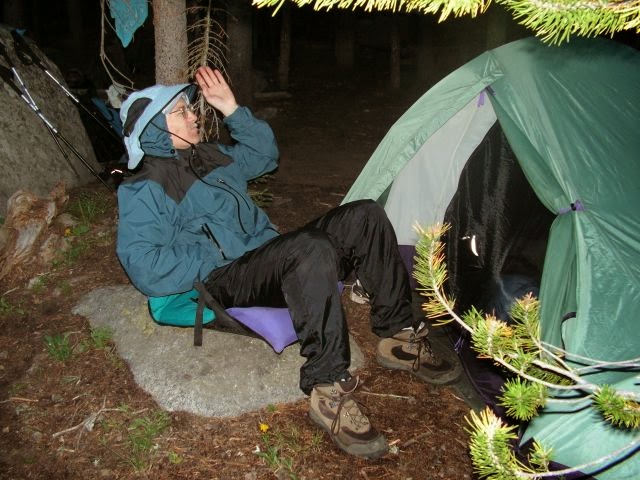 ***
And when the pack comes off at (or near!) the end of a long hike, they might just fly away! 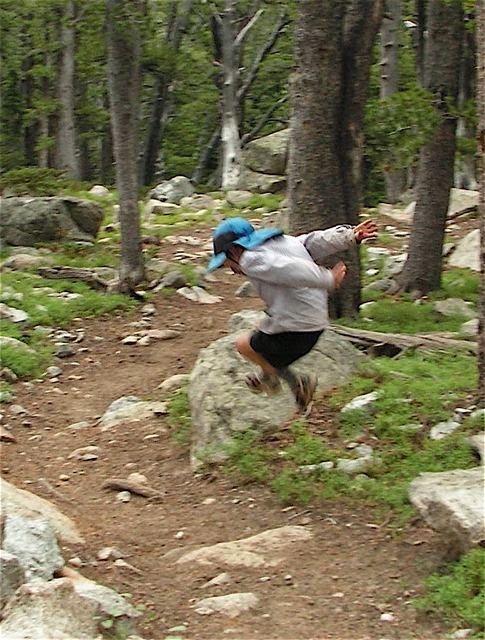 And of course, when it's all over, they'll eat ice cream.  And burgers.  And fries.  More of all of it than you would have thought possible!  If you're lucky, they will NOT proceed to become carsick.

So what are you waiting for?  Take your babies camping!


###
On an unrelated topic, the Wendig Challenge this week was to write a complete story in 100 words.  Here's mine, exactly 100 words, exclusive of the title.

The mountain was their god, the one thing on or about the Island that was always there.  And then, one day, it wasn’t.  After that, there wasn’t much to do but survive, for the few people left.  Most of the island’s people were gone, buried under the rubble and the lava.

Those who were left worked and struggled and ate everything that wasn’t stone, and they survived.  But they did not pray to the mountain-god that had turned on them.  Gradually, they rebuilt their world with neither mountain nor god.

Email ThisBlogThis!Share to TwitterShare to FacebookShare to Pinterest
Labels: A is for Alpine, backpacking with kids, boys, Wind River Mountains