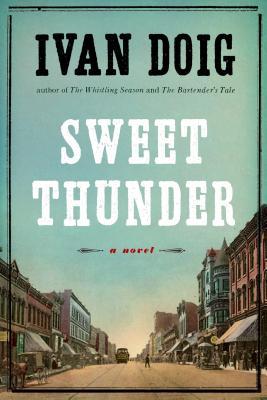 Summary:
Doig has continued the saga of Morrie Morgan begun in The Whistling Season and Work Song, bringing us up to date on the exploits of the ever-inventive and often-in-hot-water Morrie.  Married now, he's been living high all over the globe, but is about to come crashing down when an offer they can't refuse bring them back to Butte, Montana and a job with the union-sympathizing and fair-wage-advocating newspaper, the Thunder.

Review:
Nothing ever runs in a straight line for Morrie Morgan, and Doig spins his stories with both creative turns of plot and brilliantly constructed wordcraft.  Just at first I wasn't sure this would rise to the level of some of Doig's other work in terms of grabbing my interest--maybe because it opened in San Francisco rather than Montana.  But within a chapter or so, I was fully caught in the story and the prose, and raced on to the end with that painful mixture of desire to linger and inability to stop reading that marks my reaction to really good books.  I think The Whistling Season remains my favorite of Doig's novels, but this is an excellent addition to the collection.

Recommendation:
Frankly, I'll recommend Ivan Doig to anyone who will stand still long enough to hear me.  But this is perhaps of extra interest (along with Work Song) to anyone who has an interest not only in Montana but also in the history of unions in the United States.  It's clear where Doig's sympathies lie, but he gets in a few digs at both sides, and some at Prohibition while he's at it.


Full Disclosure: I checked  Sweet Thunder out of my library, and received nothing from the writer or publisher in exchange for my honest review.  The opinions expressed are my own and those of no one else.  I am disclosing this in accordance with the Federal Trade Commission's 16 CFR, Part 255: "Guides Concerning the Use of Endorsements and Testimonials in Advertising."
Posted by Rebecca M. Douglass at 12:30 AM