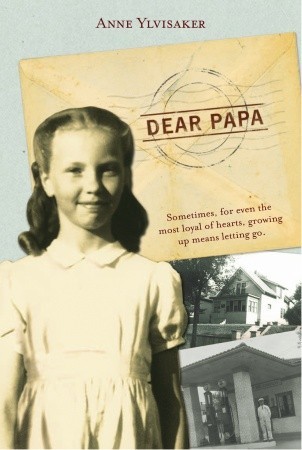 Summary:
When the book opens Isabelle is 9, and learning to write letters at school.  She chooses to write to her dead Papa, because she sometimes feels like she's the only one who thinks about him.  To make it worse, her mother sends her and her older sisters to live with relatives, which feels to the 9-year-old like a total rejection.

Eventually, Isabelle writes to her Aunt Isabelle, her sisters and brother, and her friends, as well as her Papa.  But the whole story is told in her letters--letters written over a span of years, though the bulk of the story takes place between ages 9 and 12.

Set during WWII, the story reflects its time, but it is ultimately the story of a girl growing up, not of a country at war.

Review:
The epistolary format makes this book a quick read, but that doesn't mean it's shallow.  I think that the author captures nicely Isabelle's sense of isolation, her fears, and above all her in-the-middle place in the family.  Her older sisters are old enough to be realistic about their father's death and the fact that there mother is moving on--must move on.  Her younger brother and sister are young enough to quickly forget their father, except in a vague sort of way.  To Isabelle, all these are betrayals.

The author does a great job of letting the reader see and understand more than Isabelle does, even though all the words are hers.  Though I think a child reading this would be much more likely to take characters (like the new man in her mother's life) at Isabelle's reading of them, at least as an adult I could see that there was more depth there than she credits.

Recommendation:
A decent, though not exceptional read, and good for those who enjoy historical fiction and coming-of-age novels.


Full Disclosure: I checked  Dear Papa  out of my library, and received nothing from the writer or publisher in exchange for my honest review.  The opinions expressed are my own and those of no one else.  I am disclosing this in accordance with the Federal Trade Commission's 16 CFR, Part 255: "Guides Concerning the Use of Endorsements and Testimonials in Advertising."
Posted by Rebecca M. Douglass at 12:30 AM