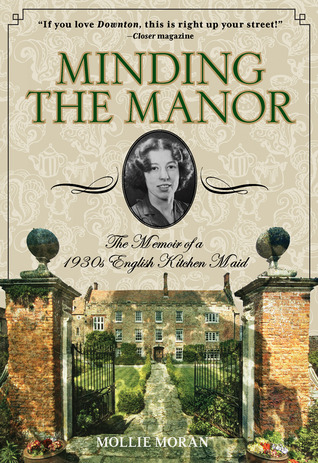 Summary:
The subtitle really says it all.  This is the memoir of a woman who worked in the kitchens of the British Aristocracy in the time between the wars, the last years of the real servant system.  She started as a scullery maid at age 14, and by just past 20 got work as a cook.  Though she includes a bit of her childhood to provide context, and a quick summary of her life after she got married and left service, the book is about being part of the "downstairs" society.
Review:
Mollie Moran has retained a writing voice that reflects her upbringing.  The book reads very much like she's talking to you about her life then, including some odd grammatical quirks and a tendency to directly address the reader.  It's a style that makes the book feel less professional, but at the same time more real.  Dialogue is used freely, though obviously it must be reconstructed, a permissible stretching for a memoir, I believe.  The book was a quick, easy read and definitely interesting to those who like the history of that period (like me), despite an unpolished feeling.

Recommendation:
The cover says that if you are a fan of Downton Abbey you'll like this, and it's probably true.  I'd recommend it for those interested in the period, for whatever reason, and perhaps especially for us Yankees who may not have a very good grip on the class system (I spent a winter taking a dive into that system in a way, working as an au pair for a rather wealthy family in Monaco.  I didn't take very kindly to being treated as a servant.  Maybe you have to be brought up to it!).

Full Disclosure: I checked Minding the Manor out of my library, and received nothing from the writer or publisher in exchange for my honest review.  The opinions expressed are my own and those of no one else.  I am disclosing this in accordance with the Federal Trade Commission's 16 CFR, Part 255: "Guides Concerning the Use of Endorsements and Testimonials in Advertising."


*****************
Today is Memorial Day here in the US, so I want to just take a moment to say "thank you" to all those who have served and died for our country.  So many of my parents' generation were lost to WWII, and so many have been lost since in all that "non-wars" we've fought.  We honor their sacrifice, and would like to see an end to any need for more.
Posted by Rebecca M. Douglass at 12:30 AM