I actually managed to finish a book during my holidays, and even to write a review for all of my patient readers who are not also buried in a tide of socializing (if I worked at it, I bet I could mix my metaphors a little more, but it's been a long week).  It's not holiday themed, but here's my take on the first of Joanne Fluke's Hannah Swensen mysteries. 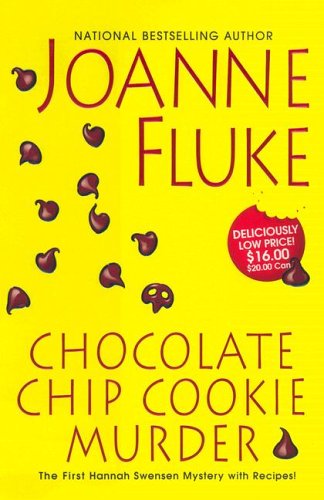 Summary:
Hannah Swensen runs The Cookie Jar, a bakery in the sleepy town of Lake Eden, Minnesota, and is reasonably content despite her mother's efforts to set her up with every available man in town (there aren't many, fortunately).  But she is less happy when the delivery from the dairy doesn't arrive one morning, and Hannah finds the delivery man dead in his truck in her alley.  He's been shot to death, with a bag of her cookies in the front seat.  Hannah doesn't like it, and she starts hunting the killer, just to help out her brother-in-law, the police detective on the case.

Review:
As the first in the series, this is just good enough to make me want to come back for more.  Hannah is a likeable narrator, her family situation is interesting (if a little stereotypical.  I think I'm going to make the relationship between my sleuth and her mother fully-functional, just to buck the trend), and the murder mystery is pretty well constructed.  But as an amateur sleuth I found Hannah a little less than perfect.  She seemed to me to be a little too quick to investigate on her own, rather than turning her ideas and discoveries over to Bill, the in-law on the Force--and he seems much too willing to forgive her for interference that could lead to no end of troubles in the trail of evidence.  She messes with crime scenes, steals evidence that "doesn't have anything to do with the murder," but would upset someone she cares about, and questions potential witnesses and suspects in a pretty blatant fashion.  All of which is within the range of normal for cozy sleuths, but Bill's connivance at it and acceptance of it is over the top.

Hannah is also very quick to jump to some conclusions, while missing others that seem obvious to me.  In particular, near the end she spots an obvious clue, but more or less ignores it to follow up another red herring.

My final take: interesting, imperfect, and I'll give Fluke a second book to rein in the wilder flights from reality.


Disclaimer: I checked Chocolate Chip Cookie Murder out from my local public library, and received nothing from the publisher or author in exchange for my honest review.  The opinions expressed herein are my own and those of no one else.
Posted by Rebecca M. Douglass at 6:00 AM