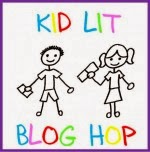 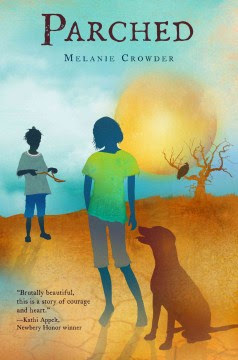 Summary:
In an unnamed (but African-feeling) land, violence has taken over as sea levels rise and drought leaves almost no fresh water anywhere.  Told from the perspectives of Sarel, a girl whose parents have been killed for their water; Nandi, the leader of the pack of dogs who surround Sarel; and Musa, a boy with the water song inside him, the story tells how all must work together to survive in a parched land.

Review:
Parched reads almost, but not quite, like a realistic novel.  The author's choice to keep the place unnamed has allowed for a slight exaggeration (I hope) of conditions compared to anywhere real, and leaves room for a hint of magic in the ability of the boy Musa to "hear" the water underground.  I usually prefer more realism and less magic (except in books that are clearly fantasy), but this is good.   The blend works, and the result is a powerfully moving book told in a lyric style that is beautiful even when the story is ugly.

And the story does have its ugly parts.  It opens with violence: the murder of Sarel's parents, and the burning of their home, and there are upsurges of violence throughout.  At times the beauty of the prose makes a striking contrast with the ugliness of human nature, though the stylistic writing keeps that ugliness at just enough distance not to be jarring.  I would, however, recommend this only for older middle-grade students, because of the violence.  Ultimately, however, it is less about how the world could look in a time of extreme shortages, and more about the beauty of the earth.

Probably my biggest criticism of the book is an ending that seems to imply that everything is fine, though the underlying causes of the children's troubles are unchanged, and I see nothing about their situation to protect them from the evil leaking out from the city.  This is not uncommon for children's books, of course--some kind of happy resolution is a good idea.  But sometimes to our adult eyes, it's too clearly contrived--or doomed to be short-lived.


Full disclosure: I borrowed a copy of Parched  from the library.  I received nothing from the author or publisher for my review, which is my honest opinion.  The opinions expressed therein are my own and those of no one else.