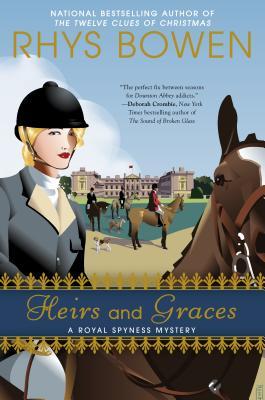 Summary:
Lady Georgianna Rannoch is 35th in line for the English throne, and in 1930-something that's not a place that gives her a lot of options.  So she's pretty happy when the Queen sends her to Kingsdowne Place, the fabulous country seat of the Duke of Eynsford, to help the new heir overcome his Ausrtralian-Outback coarseness.  Regular meals are a bonus.  Finding the current Duke with a knife in his back rather takes the edge off, however.  And when everything starts to point to her protege as the guilty party, Georgie has to take matters into her own hands.

Review:
I do enjoy this series!  Georgie is a good narrator with a self-deprecating sense of humor and just enough blind spots that we can feel a bit superior. But we also like her and care about her.  Other characters are also well-developed and though there is some tendency to caricature, it's all in the service of fun and even the more ridiculous characters still manage to feel like real people.

In this series the mystery is always a bit secondary to the rest of life, which for Georgie has a lot to do with finding her next meal and a place to live, and wishing she could marry her fiance, Darcy O'Mara, and get on with learning about sex (her friend Belinda gives her no end of trouble about her naivete).  But the mystery is also well-developed, plausible, and has at least two good red-herrings, though Georgie likes one a little too well for us to believe in his guilt. The final reveal is a surprise, in more ways than one.

The Royal Spyness mysteries are fun first and foremost, and this is a worthy addition to the collection.

Recommended for those who enjoy a little humor with their corpses, and maybe a side of romance.