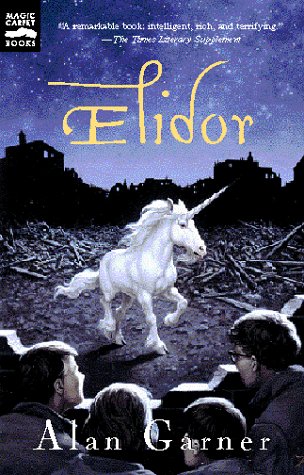 Summary:  Siblings Nicholas, David, Helen and Roland (who all appear to be near the same unspecified age, probably stepping up from about 10 or 11 to 13 or 14) are having a good wander through Manchester when something very strange happens.  They find themselves in another land, a place of magic--and a place where forces of darkness and death seem to have won.  Back in England, the children try to pretend it didn't happen--all but Roland.  He knows that there will be more to do, and he is right.

Review:
This classic fantasy definitely is not your modern fantasy.  More reminiscent of the Narnia books than Harry Potter, it actually spends very little time in the fantasy realm of Elidor, and most of the time dealing with the spill-over from that world into 1965 Manchester.  At first I found that a little disappointing, but the story is gripping, and soon I found that the problem of dealing with magic leaking into a place so mundane was if anything greater than the mission they'd faced in Elidor (not surprisingly, when the kids found themselves in Elidor, I assumed we'd be there for the rest of the book.  Garner doesn't do things that obviously, though).

The story is tight and gripping, but I did find that the characters, aside from Roland, were a little thinly drawn (as noted above, I'm not even sure how old they are--they all feel the same age, and I'm pretty sure they aren't meant to be quadruplets).  And because we spend so little time in Elidor, we are less invested than we might be in the outcome--but that's part of the story.

This is another take, as well, on the standing Middle Grade issue of what to do with the parents/responsible adults.  In this case, the children have hold of something so outrageous and unbelievable that they can't tell anyone--no one would believe them anyway.  They mostly don't really even believe it themselves.  It's up to Roland--whose name is probably not chosen by chance, and who is the only one who really believes it happened--to keep the faith and deal with the problems that their little adventure has caused.

A good read, but not I think as good as The Weirdstone of Brisingamen, by the same author, due mainly to the lack of character development.

Full disclosure: I borrowed a copy of  Elidor  from the library.  I received nothing from the author or publisher for my review, which is my honest opinion.  The opinions expressed therein are my own and those of no one else.