Announcing the release of a collection of sample chapters from Middle Grade fiction, including my own Ninja Librarian.  Not only can you sample 14 great reads, you can find the secret key and enter a drawing for a Kindle Fire! 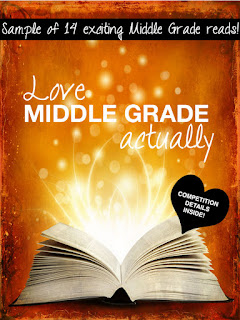 Here's the scoop on this great way to explore some new authors:

First, the contest.
WIN A KINDLE FIRE (Value of $159)
Download, find the secret phrase, and enter it into the contest link embedded in the ebook.


Then the tantalizing tidbits!
Treat yourself and your kids with a special gift this Valentine's Day! This is a sample of 14 exciting Middle Grade stories that you will love and the chance to win an e-reader. Competition opens 1 February 2013 and the winner will be announced on 14 February 2013.

Whether you like fantasy, adventure, mystery or humor, "Love Middle Grade Actually" gives you a taste of it all.

Sally Harris - Diary of a Penguin-napper (3 weeks, 2 boys, 1 little penguin - what could possibly go wrong? Inspired by the urban myth that it is possible to steal a penguin from the zoo on a school visit using just a backpack!)

SW Lothian - The Golden Scarab (When JJ discovers the secret of time travel at his dad’s museum, he finds himself catapulted back to ancient Egypt with his best friend, smack-bang at the centre of an action-packed race against time and living statues to find the sacred Golden Scarab.)

Julie Anne Grasso - Escape from the Forbidden Planet (Caramel Cinnamon thought the worst day of her life was the day her grandparents, the King and Queen of the Elves of Cardamom went missing. She was wrong!)

Natalie Bahm - The Secret Underground (Anxious to forget the bank robbery she witnessed, twelve-year-old Ally joins her brother and the rest of the neighborhood boys (including the cutest boy in her class) in digging a secret tunnel to an abandoned steel mill.)

Jemima Pett - The Princelings and the Pirates (A simple mission to solve a problem with the winery turns into a nightmare as our guinea pig heroes, Princelings Fred and George, are captured by pirates, rescue a damsel in distress, and get more than they bargained for in the battle of Dimerie)

Rebecca M Douglass – The Ninja Librarian (Skunk Corners is a dusty, tough, unfriendly town until the Ninja Librarian—a mild-mannered librarian who offers his wisdom with a little extra when folks don’t listen—gets off the train and moves into the library).

Adam C. Veile - The Dreamcatcher Adventures: Greedy Jack Wallace (When the ghost of his rowdy Wild West ancestor appears, seventh-grader Blake Monroe joins him in the search for a hidden treasure, but they soon discover a deadly outlaw is in pursuit and they’ll be lucky to escape with their lives!)

Krista Michelle Breen - Knockout: The Hermit's Escape (When Phillip Brooks’ new horse leaves him face down in the mud, he soon discovers something very strange is going on inside the old hermit Bert Massey’s house.)

Stanley & Katrina - The Perpetual Papers of the Pack of Pets (Cat and Dog. It is a love/hate relationship. Enter the inner psyche of these creatures as they try to peacefully coexist within the same house. Cleverly written. Hilarious antics.)

Anna Olswanger - Greenhorn (Greenhorn is a powerful story that gives human dimension to the Holocaust. It poignantly underscores our flawed humanity and speaks to the healing value of friendship. )


Find it at Amazon http://www.amazon.com/Love-Middle-Grade-Actually-ebook/dp/B00B2KEI32/ref=sr_1_1?ie=UTF8&qid=1358793249&sr=8-1&keywords=love+middle+grade%2C+actually
Urge them to pricematch the Smashwords edition, because this ebook is meant to be absolutely free!
(Or just head on over to Smashwords, where you can download any format you need, and give Amazon one in the eye).

This is my first real effort at promotion, and I want to thank Sally Harris for making it possible (and doing all the hard parts).
Posted by Rebecca M. Douglass at 10:46 AM