Brainerd Lake and the Devil's Postpile

We are due for another photo extravaganza with pictures from the last two training hikes we did in the Eastern Sierra before shouldering our backpacks for a couple of trip, which will get their own reports.

At Big Pine Creek (not to be confused with Pine Creek, of course!) we opted for the road less taken, skipped the Palisades and Pine Lakes, and went for Brainerd Lake. That proved to be a good choice, both scenically and for our training, given the sort of climb involved!

As with all these hikes, we tried to start as close to first adequate light as possible, to beat the heat and--in this case--the afternoon thunderstorms. Those storms should have been an issue on many more days, but the summer monsoon really failed this year. 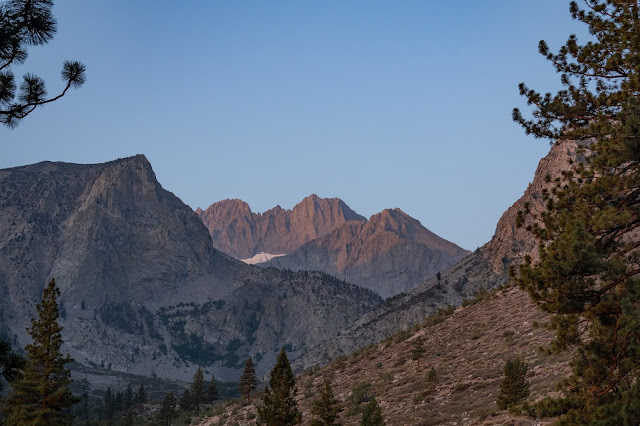 We managed to cover maybe 2 1/2 miles and a third of the climb before the sun caught us. Deep in the shade of the cliff, where the sun doesn't burn them out of existence, we found a number of beautiful pink and yellow columbines. 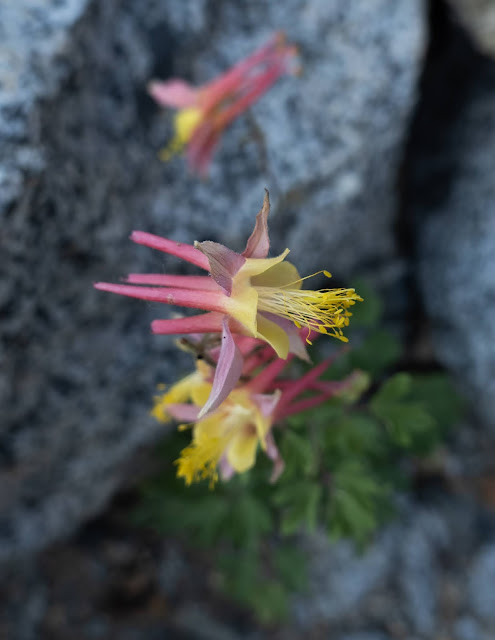 Topping out that first long climb took us into the sun and warmer temps, but also into some amazing views of the granite that made the Sierra famous. 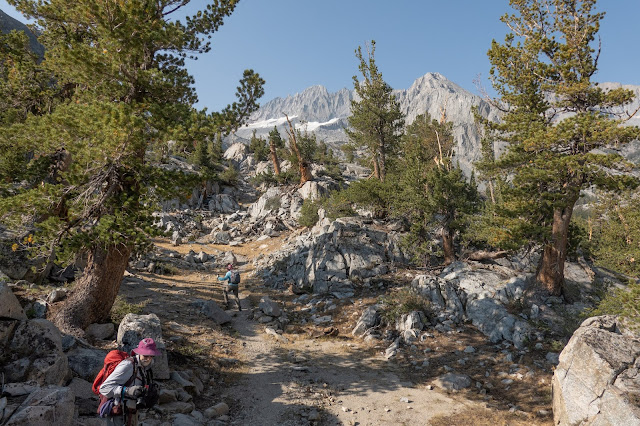 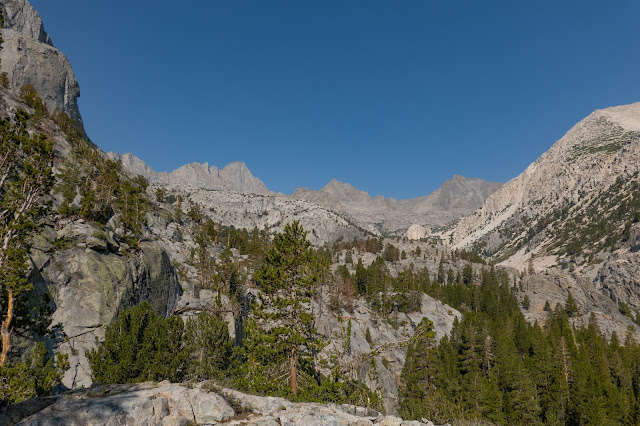 The lake was worth the hike, but honestly the vistas along the way were more so! 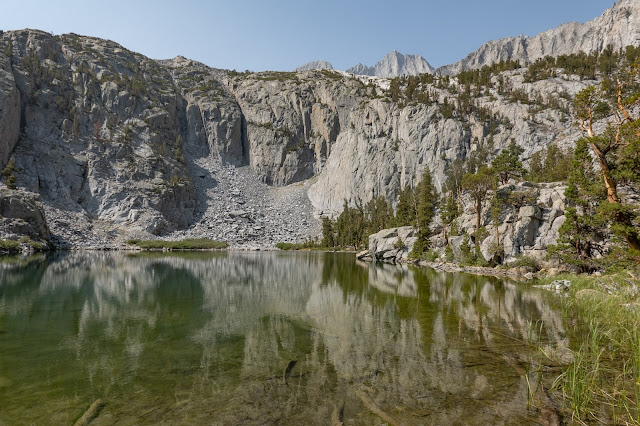 Made it back to the cars just before the big raindrops hit, though it didn't make for much of a storm. 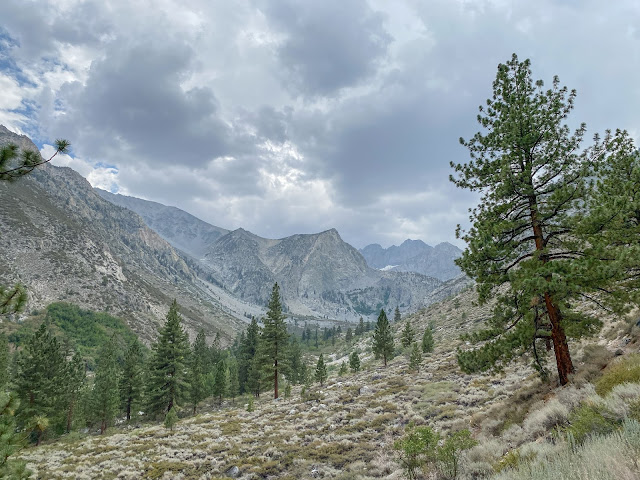 By the time we'd made camp on the other side of the valley, I was able to sit outside to do my writing while recovering from the 9.2-mile, 2800' day. 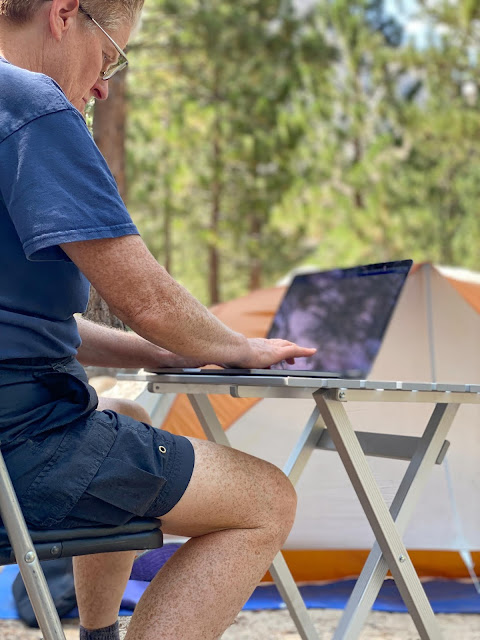 The second hike in today's post was actually between our two backpacking trips, an easy loop (aside from the heat; it was the lowest-elevation hike we did) to Devil's Postpile and Rainbow Falls.

Devil's Postpile, near Mammoth, CA, is one of the more impressive collections of basalt columns around (they brag about being the biggest and best but I thought the ones in the Grand Canyon were bigger, to say nothing of Devil's Tower). The Postpile was formed about 100,000 years ago, when a volcanic eruption filled the valley about 400' deep with molten lava. As the lava cooled and shrank, the surface cracked, and as it continued to cool, the cracks extended downward. The hexagon is one of nature's most stable shapes, so that's the form they take. 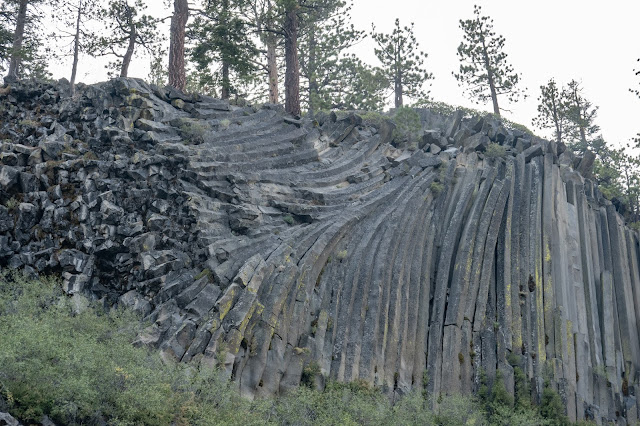 What's maybe the coolest about the Postpile is the top. About 20,000 years ago, during the last ice age, the valley was filled with a glacier, which ground off the top of the hill and put a polish on the ends of the "posts" that makes it look like a well-laid tile floor. 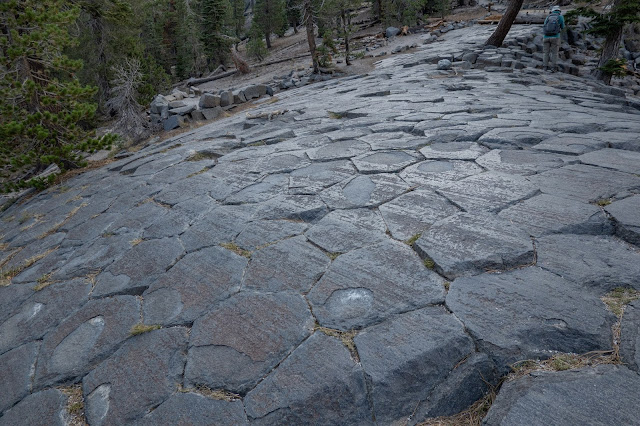 With my size 9.5 foot, to give an idea of the dimensions of the posts. 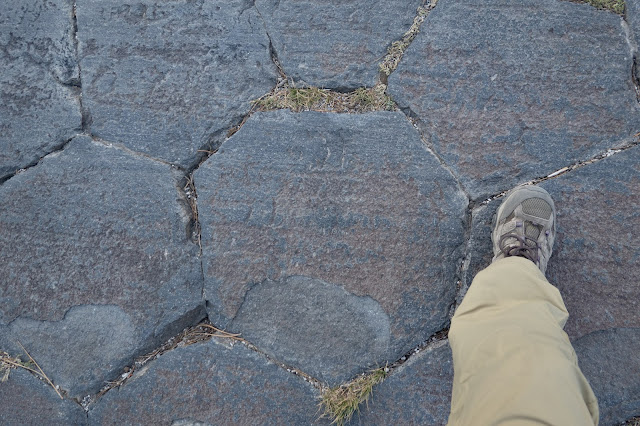 Below the Postpile, the broken bits lie in a jumble that looks like the ruins of an ancient temple. 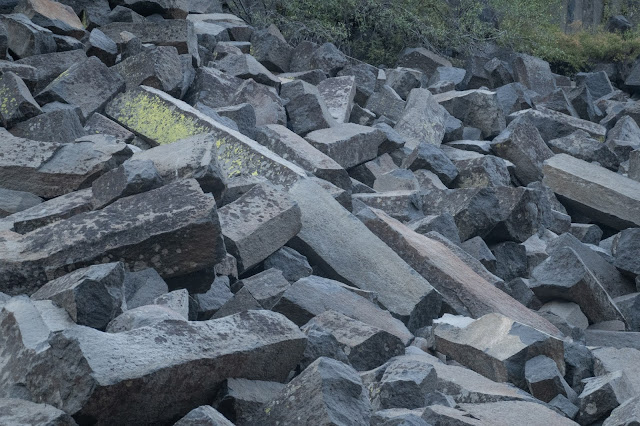 After the Postpile, Rainbow Falls felt a little anti-climactic. It's impressive--this is the San Joaquin River, which provides water to a big hunk of California (it originates 10 or 15 miles upstream at Thousand Island Lake). But the rainbows, I think, only come out in the late afternoon when the sun is shining in from the west. We were there before 8:45 a.m., so no rainbows. But we were also able to finish the hike before we roasted, so there's that. 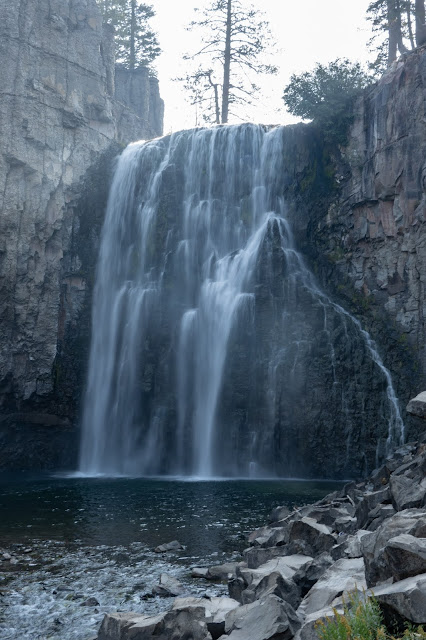 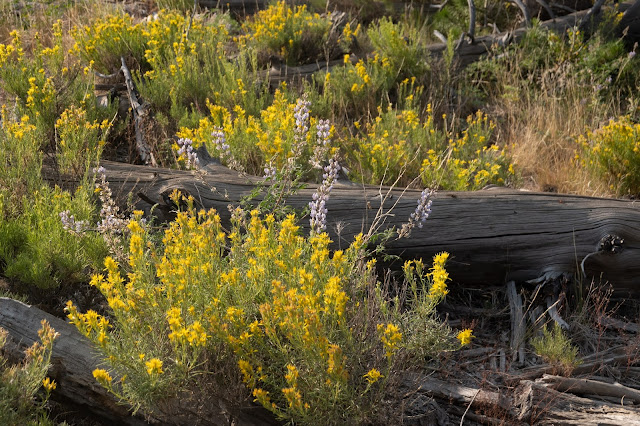