Our 4th day in Antarctica was the only one where we didn't get to do two outings, thanks to the weather. But we did get both a landing and a cruise at Portal Point, and had some special wildlife sightings.

They split the group so only half of us landed at a time (due to constrained space on land), and I was in the batch that got dropped ashore first. This fantastic duo was there to greet us!
Seals are very fast and graceful in the water, but even more so than penguins they are at a disadvantage on land.

Whenever we were ashore, members of the expedition staff went ahead of us with markers to show where we shouldn't go. Sometimes they wanted to keep us away from penguin rookeries or cranky seals. In this case, it was to keep us from the unstable edges of the snowfield, which dropped off 100' or so into the ocean.
Then it started to snow, which was actually amazing and fantastic, even if my camera did want to focus on the snowflakes, making for a lot of photos I had to toss. 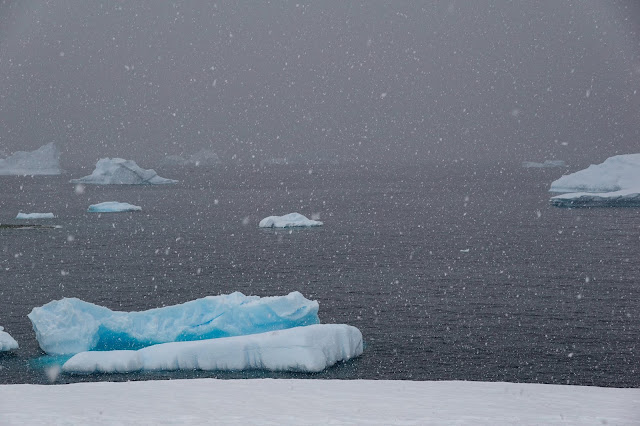 Snow in Antarctica--what could be more appropriate?
Snow made everything more beautiful, and reminded us that a) the weather can turn bad any time of year, and b) it was nearly the autumn equinox, so summer was over.
After an hour ashore, we swapped with those who'd been out cruising, and headed out to look for whales. We'd already seen several from up on the bluff, including one breeching.

We also checked out the ice bergs, which as usual were beautiful.
My husband took the photo below. I include it because it not only shows the color of the ice and water, but also the dirt stripes. The vertical dark stripes show that this berg is lying 90 degrees from how it stood as part of the glacier. The stripes are dirt, laid down in several seasons, perhaps when slopes above the glacier slid and dumped dirt on the ice.
I'm pretty sure this berg has some history.
I promised you whales. This was the only place I saw breeching whales. Apologies for the quality of the photo, but long telephotos on a wildly rocking zodiac make for less-than-perfect photos.
Just for fun--this is blurry, but gives some idea of the splash that thing made when it came back down.
Not long after that, we got called back to the ship, as conditions were deteriorating. The snow had turned to rain, and we were getting cold and wet. It was certainly a luxury and a delight to have a hot shower after outings like this. I felt bad for the early explorers, who must have pretty much been cold and wet for weeks at a time (other times they would have dried out, but still been cold).

As the seals had greeted us, the whales waved goodbye.


###
All images and text ©Rebecca M. Douglass, 2020, unless otherwise indicated.
As always, please ask permission to use any photos or text. Link-backs appreciated!