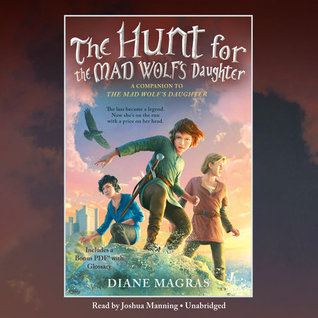 Publisher's Blurb:
In this Scottish medieval adventure, after attempting a daring rescue of her war-band family, Drest learns that Lord Faintree's traitorous uncle has claimed the castle for his own and convinced the knights that the lord has been slain . . . at her hand. Now with a hefty price on her head, Drest must find a way to escape treacherous knights, all the while proving to her father, the "Mad Wolf of the North," and her irrepressible band of brothers that she is destined for more than a life of running and hiding. Even if that means redefining what it means to be a warrior.

My Review:
I reviewed the companion to this book a few weeks ago. That I immediately went and put a hold on the sequel at the library tells you that I really liked the story, though it may also speak to the fact that the story isn't finished at the end of the first book (I suspect the publisher insisted the story be broken it in two to keep the books shorter). The second book did not disappoint.

The story is fast-paced, with twists and turns, and a growing friendship where once there was, if not hatred, then certainly anger and distrust. The best aspect of the book, in my opinion, is the way in which Drest demonstrates that being a warrior doesn't mean she can't be loving and empathetic. The character development is what raises Drest's story above the standard run of medieval adventures. I also appreciated that the author chose not to make this a fantasy of magic and sorcery. She has done her research well, and in the end notes gives just enough explanation of that research to interest a kid and explain where Drest's story teeters on the edge of too exceptional (starting with that girl warrior, and perhaps topping out with her ability--at 12 or 13?--to defeat a full-grown knight).

Despite my occasional doubts about a person of Drest's age and size being able to accomplish everything she does, the author makes it believable, mostly. And I love that Drest is allowed to be and to remain a warrior, that it's not something she's going to "grow out of," but more something she's growing into. I also enjoy the way she imagines the voices of her brothers in her head, telling her what to do in moments of crisis.

The narration is excellent--Mr. Manning's deep growly voice fits the scene perfectly, even though at first it was startling to have a story about a girl narrated by someone with an extra-bass voice! (It wouldn't work if the book were in 1st person but though it is from Drest's point of view, it is 3rd person, and Manning has the feel of the Scottish lowlands and coasts.

My Recommendation:
If you like the period at all, or if you just like books about strong girls who aren't squished down by circumstance, read the books (be sure to start with The Mad Wolf's Daughter--this isn't a series to be read out of order). For kids from 10 up, due to moderate violence, discretely depicted.

FTC Disclosure: I checked The Mad Wolf's Daughter out of my library, and received nothing from the writer or publisher for my honest review. The opinions expressed are my own and those of no one else. I am disclosing this in accordance with the Federal Trade Commission's 16 CFR, Part 255: "Guides Concerning the Use of Endorsements and Testimonials in Advertising."