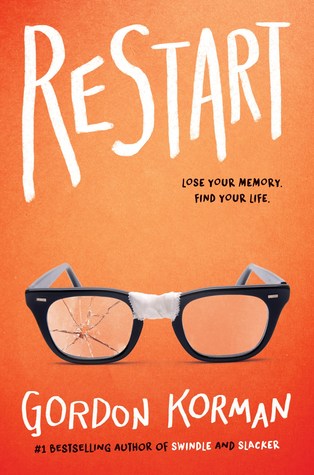 Publisher’s Blurb:
Chase's memory just went out the window.
Chase doesn't remember falling off the roof. He doesn't remember hitting his head. He doesn't, in fact, remember anything. He wakes up in a hospital room and suddenly has to learn his whole life all over again . . . starting with his own name.He knows he's Chase. But who is Chase? When he gets back to school, he sees that different kids have very different reactions to his return.Some kids treat him like a hero. Some kids are clearly afraid of him.One girl in particular is so angry with him that she pours her frozen yogurt on his head the first chance she gets.Pretty soon, it's not only a question of who Chase is--it's a question of who he was . . . and who he's going to be.

Restart is an quick and enjoyable read with an interesting premise. I was a bit dubious at first about the whole business of Chase’s amnesia, since he could remember nothing of who he was, but everything, apparently, that he had learned in school (or seemed not to learn). I don’t know enough about head injuries and amnesia to judge, but it seemed unlikely to me that he would suddenly become a better student, as well as a better person.

Once you suspend disbelief on such points, however, the idea is fantastic—that someone who is (now) a decent and caring individual discovers that he has been someone and done things he despises. That means that our protagonist is seeing bullying from two directions at once, and it gets worse (for him) when his “friends” from before his accident try to manipulate him into being his old self.

Korman has put a lot of thought into how bullying works and how a group of kids can become truly cruel and awful. I might have liked it better if there’d been some indication that the two friends with whom Chase has always ganged up were separated from each other occasionally and showed signs of being able to think, as well. They are definitely single-dimension characters, apparently unable to grow or change in any way (which does put Chase in the position of recognizing that some friends are toxic). In fact, most of the characters are pretty cartoon-y, and I don’t think middle-grade readers would be unable to cope with a touch more nuance.

As for the sports element, I am no fan of football, but the game doesn’t dominate the story. Still, the football element may appeal to some readers who would otherwise not even look at the book.


For middle-school (11-14) boys, especially the sports-crazy. I can recommend it for any bullies, but they probably wouldn’t read it, or wouldn’t get it.

Full Disclosure: I checked Restart out of my library, and received nothing from the writer or publisher in exchange for my honest review.  The opinions expressed are my own and those of no one else.  I am disclosing this in accordance with the Federal Trade Commission's 16 CFR, Part 255: "Guides Concerning the Use of Endorsements and Testimonials in Advertising."