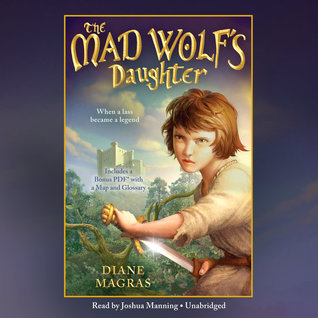 Publisher's Blurb:
One dark night, Drest's sheltered life on a remote Scottish headland is shattered when invading knights capture her family, but leave Drest behind. Her father, the Mad Wolf of the North, and her beloved brothers are a fearsome war-band, but now Drest is the only one who can save them. So she starts off on a wild rescue attempt, taking a wounded invader along as a hostage.

Hunted by a bandit with a dark link to her family's past, aided by a witch whom she rescues from the stake, Drest travels through unwelcoming villages, desolate forests, and haunted towns. Every time she faces a challenge, her five brothers speak to her in her mind about courage and her role in the war-band. But on her journey, Drest learns that the war-band is legendary for terrorizing the land. If she frees them, they'll not hesitate to hurt the gentle knight who's become her friend.

Drest thought that all she wanted was her family back; now she has to wonder what their freedom would really mean. Is she her father's daughter or is it time to become her own legend?

My Review:
This was one of those books I picked somewhat randomly--I needed something to listen to, and just browsed the "historical children's fiction" section of my library's Overdrive catalog. The blurb sounded kind of intriguing, so I gave it a go, not expecting a lot. I was pleasantly surprised.

The story is well-written, and a great deal more nuanced than I expected. I thought it would be a pretty straightforward adventure with a bunch of fighting and excitement. It certainly had all that. But it also had a more serious side, as Drest has to face the reality of just what her father is, and the consequences of her own actions. Helping her hostage survive brings her to another question about her own family and beliefs. I loved that she is thinking and seeing things, even her beloved family, in a new and more complex light.

The audio book was as well-executed as the story, and this was one of those audio books that makes me do more chores--because I listen while doing things like clean house, and I didn't want to stop.

My Recommendation:
A very promising start to a series, with some violence but appropriate for kids maybe 10 or 11 and up, as nothing is graphic. Lots of appeal as the publisher notes for those who like Tamora Pierce's strong heroines.

FTC Disclosure: I checked The Mad Wolf's Daughter out of my library, and received nothing from the writer or publisher for my honest review. The opinions expressed are my own and those of no one else. I am disclosing this in accordance with the Federal Trade Commission's 16 CFR, Part 255: "Guides Concerning the Use of Endorsements and Testimonials in Advertising."

Happy New Year to you all! Be sure to check out the Smashwords sale and stock up for your winter reading!
Posted by Rebecca M. Douglass at 12:00 AM