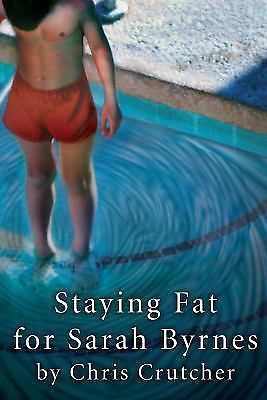 Publisher's Blurb:
Sarah Byrnes and Eric Calhoune have been friends for years. When they were children, his weight and her scars made them both outcasts. Now Sarah Byrnes—the smartest, toughest person Eric has ever known—sits silent in a hospital. Eric must uncover the terrible secret she’s hiding before its dark current pulls them both under. Will appeal to fans of Marieke Nijkamp, Andrew Smith, and John Corey Whaley.

My Review:
I'd heard about this book for a while, though I can't now recall why or where. I was vaguely under the impression that it was a middle grade book (for the 8-12 crowd), but in spite of having gotten it from the Kids' section of the library's Overdrive collection, it is definitely YA. The book deals with some pretty heavy issues (including child abuse, suicide, abortion, and sex), and does so frankly.

Now that's out of the way, on to the review.

I was totally gripped by this book. I had no idea what to expect, and in fact I didn't really even read the blurb. I was just looking for something to listen to while I do chores, and thought "oh, I've heard of that. It's supposed to be good." So I wasn't prepared for the emotional power of the story, which was expertly balanced with humor and a lot of insight into the teenaged mind. The story is narrated by Eric Calhoune, and I liked that he doesn't totally justify all the sometimes hurtful things he's done over the years. Instead, Sarah's crisis triggers him to make a step forward closer to adulthood, and to consider himself and his actions a little more carefully.

Some tense moments round out the story, some just plain adventure-story tense and some tense with importance and emotional power. I might offer a critique that the danger-tense part felt a little contrived, though it's consistent with characters' actions throughout. On the other hand, it is also told in Eric's note-perfect self-deprecating style, so that even while I held my breath about the outcome I was also close to laughter at the process. A larger criticism might be that the author's political position and opinions come through perhaps a bit too loudly at times. That didn't bother me, because I largely agreed with them, and because Eric isn't rabid, but rather is trying to understand things. In fact, the strongest stance, in my opinion, is against those who think they know all the answers.


My Recommendation:
This book has both won awards and been banned about as much as any YA book. I get why both have happened. I come down on the "awards" side, because the book offers teens an avenue to start thinking critically about important issues. That it also offers a strong argument for backing away from dogmatic beliefs will make some parents and teens uncomfortable. My recommendation is that they read it anyway, and keep an open mind. I don't recommend it for kids under at least age 12.

FTC Disclosure: I checked Staying Fat for Sarah Byrnes out of my library, and received nothing from the writer or publisher for my honest review. The opinions expressed are my own and those of no one else. I am disclosing this in accordance with the Federal Trade Commission's 16 CFR, Part 255: "Guides Concerning the Use of Endorsements and Testimonials in Advertising."
Posted by Rebecca M. Douglass at 12:00 AM