Still working my way through the photos from our time in New Zealand! Back in late February, we did a trip from Christchurch down the east coast of South Island all the way to Invercargill, then up to Te Anau, the launching point for our Milford Track tramp. I've picked a few highlights from the trip south, into an area that gets a lot less attention than many parts of the island. We weren't sure what we'd find, but we found more than enough to fill our 4 days

Oamaru: Steampunk HQ
This trip included not only our 21-y.o. son, but a friend of his as well (I'll call him Friend B). It was in part with the boys in mind that we planned a visit to Steampunk Headquarters. We didn't regret it.
Out back there were a lot of interesting machines welded together from stray parts and a lot of imagination.
One of the fun things was the Metagalactic pipe organ, which played sounds picked up from around the universe when the keys were pressed.

Moeraki Boulders
These spherical rocks are concretions of Paleolithic mudstone. I'll let you look it up yourself if you want more specifics about how that worked, but the result is fascinating spheres that have eroded out along the beach by Moeraki, like giant dragon eggs.

Dunedin--the Otago Peninsula
Dunedin town was mostly a place to spend the night, though it's an attractive setting and if we'd had more time, a bit of an explore of NZ's most Scottish city would have been fun! The real attraction for us was the Otago Peninsula, renowned for wildlife and spectacular beaches.

Allen's Beach was justly renowned for being a glorious expanse of beach. We had to walk wide around the occasional seal or sea lion.
Sandfly Beach was another noted for the sand, surf, and seals.
We drove up Sandymount, between Allen's Beach and Sandfly Beach, for great views of the area. 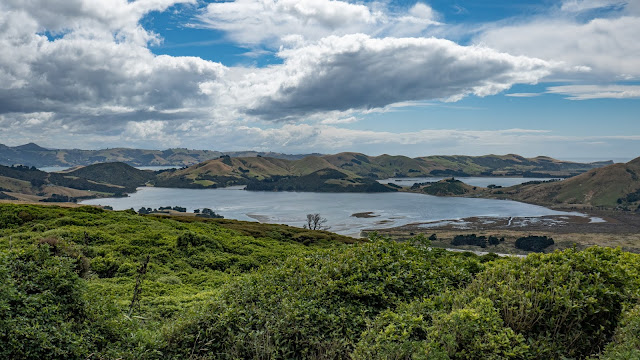 A two or three mile hike around the Sandymount took us to various scenic features, like this arch dubbed "Lovers' Leap." 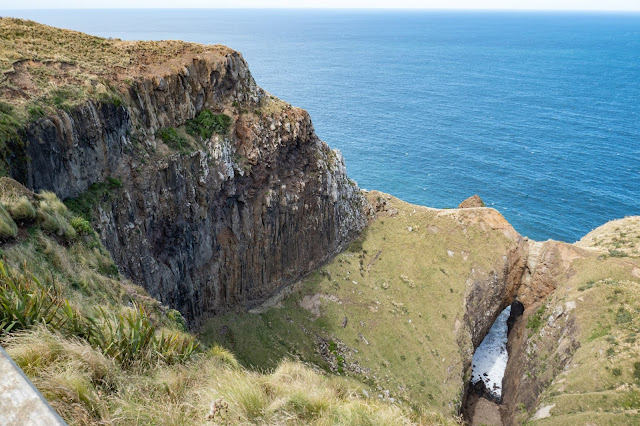 We eventually continued our journey south, stopping not far along to admire the Nugget Point lighthouse. 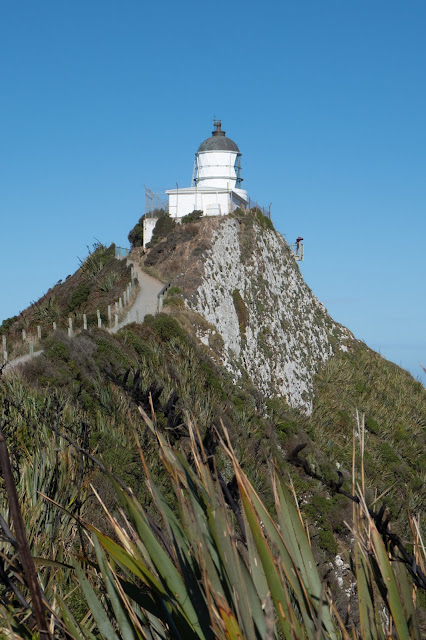 The Catlins (Cathedral Caves, McLean Falls, Petrified Forest, Slope Point)
The Catlins is the farthest-south region of South Island, encompassing both the Catlins Forest Park and some amazing coastline with a few hidden gems. We stayed two nights in Fortrose so we could spend an entire day exploring. Since at least two stops were dependent on the tides, we had to time things carefully.

Cathedral Caves are aptly named, as the sea-caves have vast vaulted ceilings. Openings are accessible only for a couple hour each side of low tide, so visitation is concentrated.
The cliffs are limestone, which lends itself well to cave formation.
Some of the cracks didn't look promising, but led far back under the cliffs.
As this post has become terribly long, I am going to break it here and continue next week!