Before I start with the photos, just a reminded that this week (or next) is #Fi50–-Fiction in 50 (words). The March prompt is “Whenever.” Have at it, wordies!

Also: I apologize for the wonky fonts. I can’t seem to clear them out and make it good, at least not with the iPad. Skip the text and enjoy the pictures :)
Background: My husband and I and our 21-year-old son are spending several months traveling and tramping in New Zealand. We arrived on the South Island Dec. 28, 2018, and spent January hiking like crazy with Dave’s brother and his wife, before sending them home and settling into a home base in Christchurch, allowing me a bit more time between adventures to get some blogging and writing done! I’m posting photo reports on our major tramping trips.

In two trips to New Zealand, I’ve tramped at least 10 different tracks, if you count all the trips of at least one night. Out of them all, I have to say that the Rees-Dart loop is my favorite. The scenery is spectacular pretty much every step of the way, and while the track is busy, it is difficult enough to keep it from being overwhelmed as the famous walks (the Routeburn, Milford Track, etc.) are.

The trip also requires a roughly 20-km car shuttle, up a pair of dirt roads with stream crossings, which aren’t always passable. 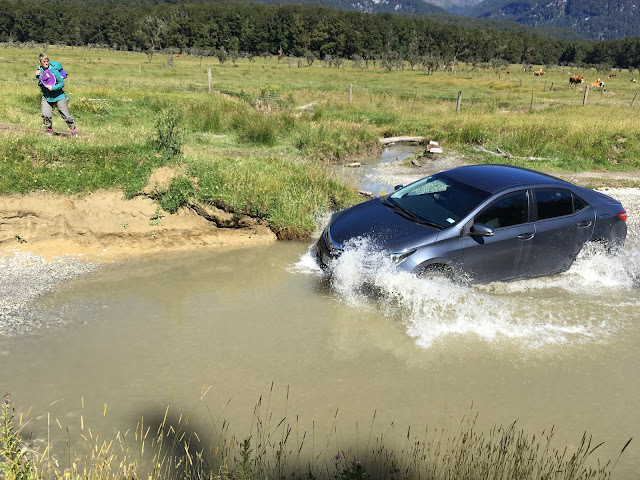 We got lucky. The roads were good enough for the passenger car that was half our shuttle operation, and the weather remained good for our entire trip (darned near unheard of!). We did take the precaution of leaving a day or two worth of food in the vehicle at the end point, just in case. If we were going to be stranded there, we were NOT going to be hungry!

Day One
We began the day by driving from Queenstown and setting up the shuttle, which means it was lunchtime before we ever started hiking. Oh, did I mention that pretty much every day’s hike was 10 miles or more? Still, we figured we could manage the tramps in the average times posted, and generally did pretty well at it.

Right off the bat we had to cross a stream, and were delighted to do it with dry feet. Little did we know that soon we’d be crossing more streams, ones we couldn’t leap (well, I couldn’t. Eldest Son managed some spectacular leaps), then slogging through boggy fields for miles. Feet did not stay dry.

Some streams did have bridges, often very bouncy swing bridges! This one had a load limit of one person. 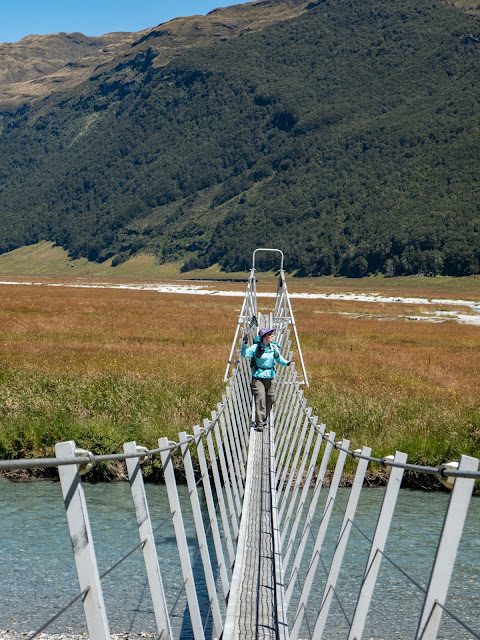 The river bottom was often boggy, but the scenery pulled us forward. 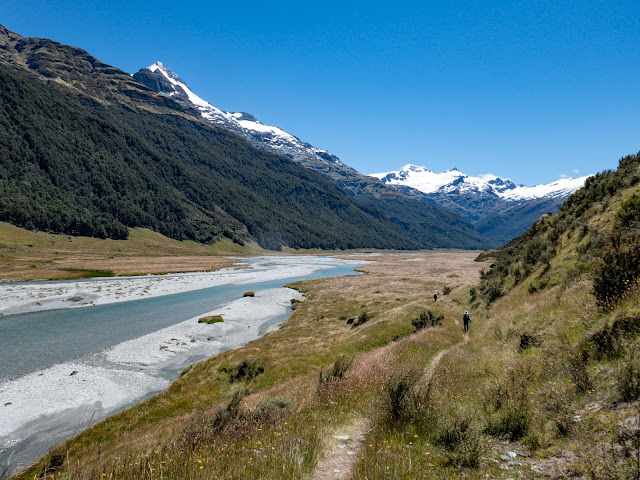 Finally, about a half hour after I wanted my dinner, we reached the hut. One of the pleasures of NZ tramping is the fantastic hut system, and we really liked having the refuge from cold, wind, and sandflies. Sometimes it was chilly even indoors, however, and everyone had her own way of dealing with it. 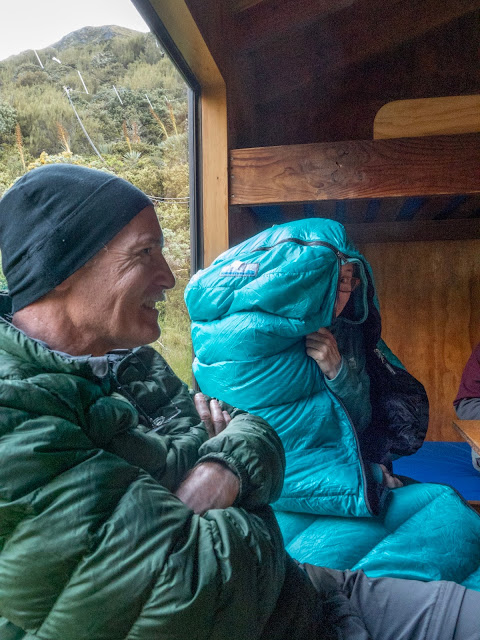 The next day was one of the real toughies—up and over the Rees Saddle, a serious climb and an even longer descent on the other side.
When we came to the final climb, it was about as steep as we thought a “trail” could be (we learned differently on a later tramp). 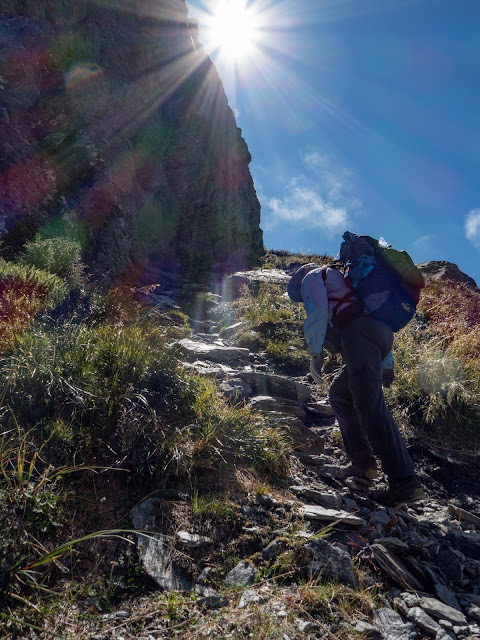 And when we got to the top, Eldest Son was waiting patiently. 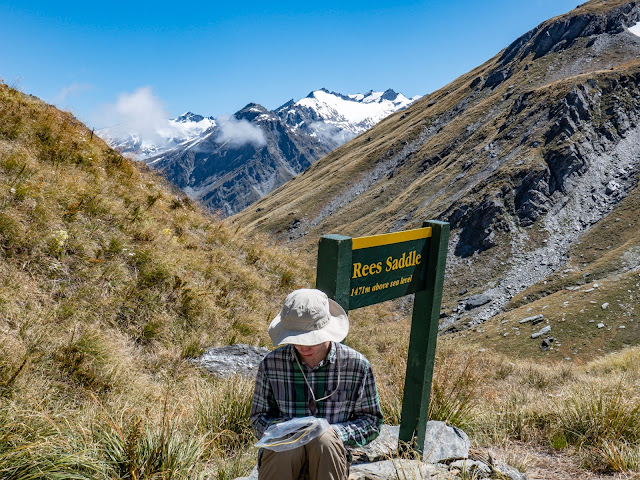 We finally started seeing the really big mountains, and the glaciers we’d come for. We were also painfully aware that our hut was down beyond the bottom of the photo at the confluence of those valleys.
Once again, we found our hut just about the time we didn’t want to go another step. Camp never looked so good!

We’d be at the Dart Hut for two nights, in order to day-hike Cascade Saddle—stay tuned for some big glaciers!