My husband and I and our 21-year-old son are spending several months traveling and tramping in New Zealand. We arrived on the South Island Dec. 28, 2018, and spent January hiking like crazy with Dave’s brother and his wife, before sending them home and settling into a home base in Christchurch, allowing me a bit more time between adventures to get some blogging and writing done! I’m posting photo reports on our major tramping trips. This is the second half of the Rees-Dart loop. For the first part, go here.

We left you last week with a late-afternoon arrival at the Dart Hut. It is a fairly new and comfortable hut, which was nice, because we were to spend two nights there (as most trampers do). The purpose: an all-day side-trip to Cascade Saddle, with views of the Dart Glacier, and over the mountain range to Mt. Aspiring and surrounding peaks.

Knowing the hike would be long and hard, the senior members of our party got up at an ungodly hour in order to start hiking as soon as it was light (this being less than a month past mid-summer, light came very early indeed). Eldest Son decided to sleep an extra hour, fix his own breakfast, and catch up later.
My sister-in-law turned back when she’d gotten a good view and the track had deteriorated. The other three of us pushed on, the stunning views compensating for stretches of boulder fields or loose scree (glacial moraines).
After a couple of hours walking up the valley, we approached the glacier, and saw the headwall we had to climb.
Even before we reached this point, Eldest Son caught up and zipped past us, having started two hours after we did.
The best views of the Dart Glacier were from below the summit, another excuse to stop.
After an eternity of climbing we can see the summit. How do we know it’s the top? Because Eldest Son is up there reading, of course!
Of course, the hike down was just as long as the hike up, and the extremely steep descent wasn’t much fun! But we made it back in time for dinner, which is all that mattered.
This is getting very long, but stick with me—Cascade Saddle was the high point of the trip, figuratively as well as literally. Our fourth day was overcast, and the hike down the valley felt a little dull by comparison with the previous day.
We were glad the overcast wasn’t producing rain. Heavy rains could change little creek crossings into impassible barriers.
The final hut was much less nice than the others, but the view from the windows was still fantastic. 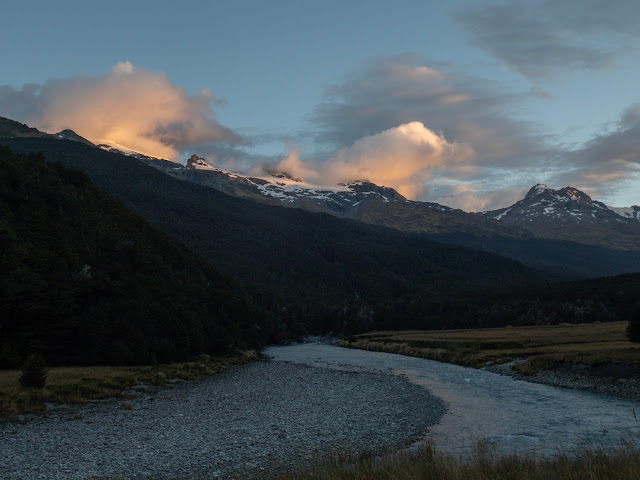 The final day included a fun climb to bypass the lake formed in 2014 when a huge landslide blocked the river. Ghost trees in the lake slowed our photographers.

The hike went on longer than we wanted, but we knew the end was approaching as the valey opened up and we got new views of new peaks.
One final meadow, a turn of the river, and we found the car park! Plenty of time for a bath in the river (yes, in that glacial run-off!) before the last members of the party made it out. 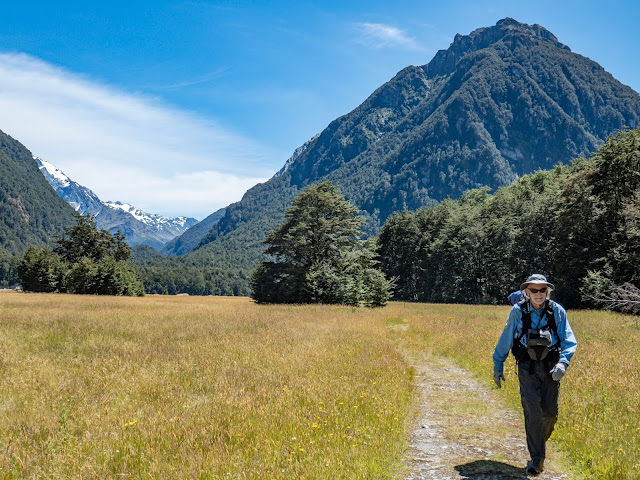 To our relief, there had been no rain, and the half-dozen or more creeks we had to cross to retrieve both cars and return to the pavement hadn’t risen. We didn’t need our emergency food, but enjoyed the snacks we’d left ourselves.

And what hiking trip would be complete without the feast on returning to town? 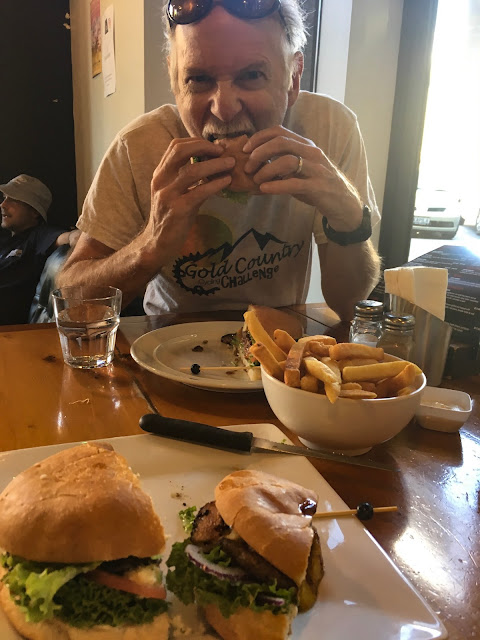