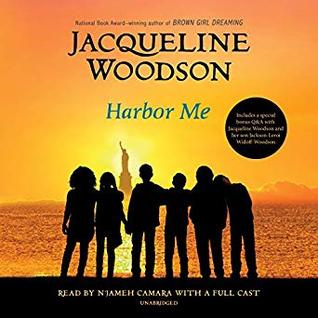 
My Review:
This was a book that announced from it’s opening line that it would be dealing with issues. That can be off-putting, but in this case, it worked well. A lot of the issues had to do with race, and with being Black in America (another character is dealing with fear of deportation, another hot-button race issue). Part of why it was so powerful, I’m certain, is because the author is African-American, and has had to have “that talk” with her own 10-year-old son. No, not the one we all have to have. The one where you explain why he can’t have a toy gun any more, or wear a hoodie in public, and how to act if the police come near you.

To make it more real, the cast reading the book included that son, as well as either another son or a friend (I couldn’t quite get that clear listening to the fascinating interview at the end of the book). The young voice actors did an amazing job, and I was surprised to find they were such young kids.

Back to the story... the kids in the book are all supposed to be “different learners,” but I felt like that was just a device to explain such a small group with the freedom to have the conversations that the book records. They don’t in fact seem to be struggling with any learning disabilities, and maybe they aren’t. The narrator, Haley, is dealing with an incarcerated father, and the other part of the story hinges on why he’s in prison, and why she is being raised by  her uncle—and what happens when her father finally comes home.

Woodson has a very real and powerful voice as a writer, and the audio version was fantastic. I can recommend it, and think those kids who voiced the children in the book did an amazing job.

My Recommendation:
This is suitable for kids from about 9 up, and lends itself to discussion about some serious issues facing our country today. In fact, I think some of the issues raised almost require some discussion with young readers, so I might recommend it for a class read or a family read.


Full Disclosure: I borrowed an electronic copy of Harbor Me from my library, and received nothing from the author or the publisher in exchange for my honest review. The opinions expressed are my own and those of no one else. I am disclosing this in accordance with the Federal Trade Commission's 16 CFR, Part 255: "Guides Concerning the Use of Endorsements and Testimonials in Advertising."
Posted by Rebecca M. Douglass at 3:00 AM