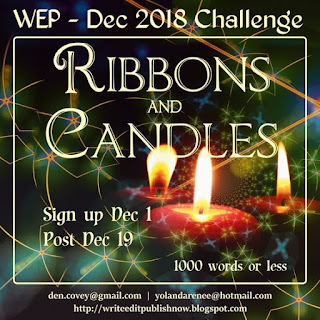 Click on the image to go to the list of fantastic WEP stories from this month, including mine. We all posted up early to make sure there would be time to read the stories before the holidays sweep us all up.

Writer’s Update:
Well, we survived NaNo, and while it was (and is) hard to maintain the momentum after the end of the month, I did manage to hang on and bring my word count up to just under 70k, with a pretty good draft of the story (not too many missing bits). I’m also considering it a positive thing that, unlike my usual process, I don’t feel the need to dump the story for 6-12 months before I look at it again. I am actually ready to continue chipping away at the big issues and working on getting the draft to the point where I can give it to beta readers, hopefully before summer (northern hemisphere summer). Apropos of that, if you are interested in beta-reading Death By Library once it’s ready, let me know. It’s book 4 of the Pismawallops PTA mysteries, but is meant to stand alone if necessary (part of what I will need to know is what else needs explaining that I’ve taken for granted).

Of course, the other reality lies in that reference to the Southern Hemisphere, because the Ninja Librarian family is off to New Zealand right after Christmas, for some pretty extensive travel. I know that nothing, and I mean nothing, will happen writing-wise during January, as we will be tramping and traveling non-stop. We’ll see after that.

Which brings us to...

Blog update:
The Ninja Librarian’s blog will be going on hiatus during January. There may be some random posts (including, of course, the IWSG post on the first Wednesday), but I don’t expect to be reading and responding to others’ posts, for which I hope you all will forgive me! I simply won’t have enough time or internet connections to do anything consistent. I hope you won’t all forget me while I’m off playing—keep coming back to check for photos, which I will post as and when I can!
Posted by Rebecca M. Douglass at 9:00 PM