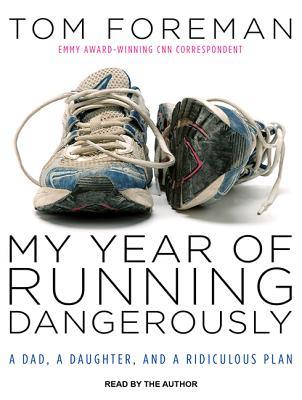 Title: My Year of Running Dangerously: A Dad, A Daughter, and a Ridiculous Plan
Author: Tom Foreman. Read by the author.

Publisher’s Blurb:
As a journalist whose career spans three decades, CNN correspondent Tom Foreman has reported from the heart of war zones, riots, and natural disasters. He has interviewed serial killers and been in the line of fire. But the most terrifying moment of his life didn't occur on the job-it occurred at home, when his eighteen-year-old daughter asked, "How would you feel about running a marathon with me?" My Year of Running Dangerously is Foreman's journey through four half-marathons, three marathons, and one fifty-five-mile race. What started as an innocent request from his daughter quickly turned into a rekindled passion for long-distance running-for the training, the camaraderie, the defeats, and the victories. Told with honesty and humor, Foreman's account captures the universal fears of aging and failure alongside the hard-won moments of triumph, tenacity, and going further than you ever thought possible.

My Review:
I'll admit this was an easy sell for me, since I like running (I can't do it anymore, but that doesn't change the fact that I liked it, and was starting to break into longer distances when my body informed me that wasn't a good plan). I also like stories of people doing challenging things, and having a father and daughter doesn't hurt, either.
So I went into this book expecting to enjoy it... and I did. Foreman's style is easy and light, with room for serious reflection alongside self-deprecating humor. He pays attention to the stress his running obsession (as it ends up becoming) puts on his family, and acknowledges their support. He also makes no attempt to make himself into something he isn't (a super-jock). He's doing some amazing running, but he's quite clear that he's still a (extremely fit) middle-aged guy.
Even though I will never run anything like the races he's done, I got to have my tiny moment of superiority when he first realizes that the ultra-marathon will be largely on trails--a kind of running he's never done and sorely underestimated at first. I was actually surprised, because for the decade + that I was a runner, I was in love with trail running--so I knew what he was in for when he left the pavement!

I do wonder a bit about some of the wisdom that seems to come from his daughters, who are in high school and college. If the thoughtful and insightful comments he attributes to them are all accurate, he has raised a pair of exceptional young women. Even if he polished it up a bit, it's nice to see a happy family.

My Recommendation:
I enjoyed this immensely. Even if you aren't a runner and never expect to do anything more strenuous than write your next novel, you can enjoy this book, which is as much about finding one's limits (of all sorts) and learning to know yourself as it is about running. If you are a runner, though, beware: it *will* make you want to start running long distances!

Full Disclosure: I borrowed an electronic copy of My Year of Running Dangerously from my library, and received nothing from the author or the publisher in exchange for my honest review. The opinions expressed are my own and those of no one else. I am disclosing this in accordance with the Federal Trade Commission's 16 CFR, Part 255: "Guides Concerning the Use of Endorsements and Testimonials in Advertising."
Posted by Rebecca M. Douglass at 9:00 PM