I have fallen far behind in my photo reports (and then I forgot to make this live, so it's late, too), so this week we are going way back to the end of September to give you all a blast of fall color from what I gather is an iconic Maine hike (okay, we'd never heard of it before, but it really is spectacular, if a bit remote). The roads to the area are private, and the trails are maintained by the Maine Appalachian Mountain Club. We accessed the gorge from the AMC's lodge at Little Lyford Pond (which was lovely).

Although we thought that calling the gorge the "Grand Canyon of the East" was a bit over the top, there is no denying that the 3 miles of gorge, with walls up to about 130' high and a series of non-trivial waterfalls was worth the price of admission. (Note: there is a literal price of admission, as the roads that lead to the trails are privately owned and maintained. Our entrance was covered in the cost of our stay at the lodge. The figurative "price of admission" was a 10-mile hike).

The afternoon before our Gulf Hagas hike we climbed a hill near the lodge and got a sense of the landscape. But we couldn't tell at all that just off to the right of this photo there's a good hole in a earth.
Next day we started right after breakfast, aware that daylight was limited and the weather might be changeable. Before we even reached the creek, we were amazed at the way the trees change color. 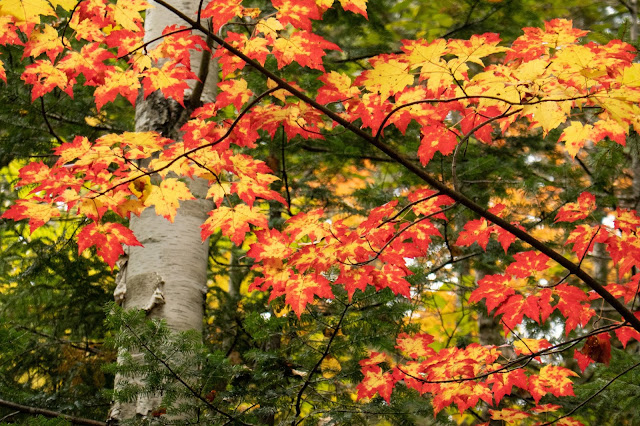 We reached the river/creek before it entered the gorge.
At the first falls we were unimpressed with the 'gorge' but enjoyed the craggy rocks about the the creek. Evidence on the rocks also told us that at times the water ran a great deal higher and faster than the autumn flow.
The falls grew more impressive, the gorge deeper and less accessible as we followed the trail downstream. On a hot day, it would be worthwhile climbing down there and taking a dip. Temps while we were there were not cold, but not "let's swim," either.
Between falls, there were still places with pools and calm water.
Not all the beauty was in the river. 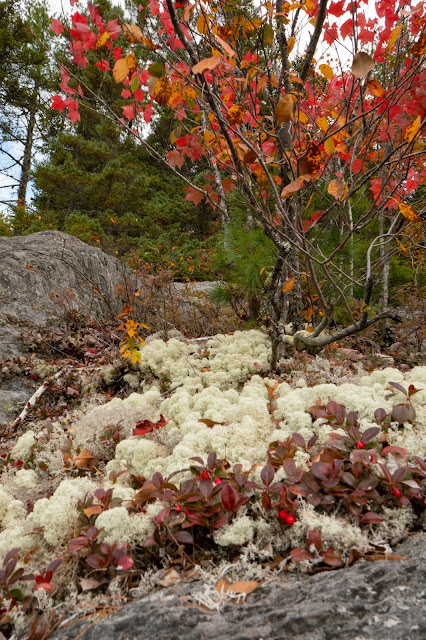 Finally left the gorge--I think we could have gone on, but were already looking at 10+ miles round trip. The stream that we followed up from the gorge had it's own falls. 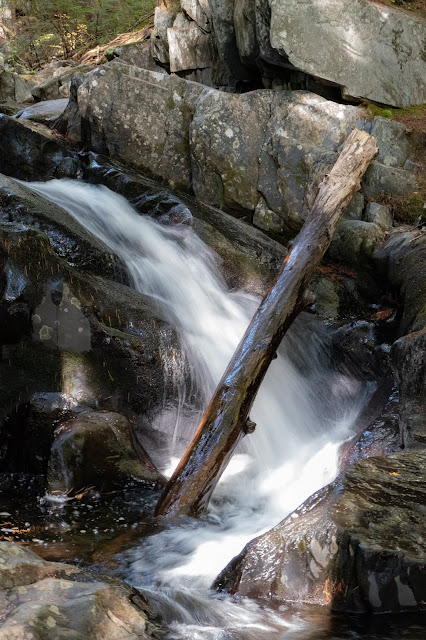 The return to camp on a higher trail, away from the river, was less scenic, but much easier hiking. The gorge trail is rough, crossed with endless roots and rocks, and at times offers dizzying views off the cliff. It was a relief to get on a wide, relatively smooth trail and pound out the miles back to the lodge, where dinner awaited us. We don't usually indulge in that kind of luxury (indoor beds and meals laid on--even our sack lunches)--but I have to say it was a treat that night!