Non-fiction Audio: East to the Dawn 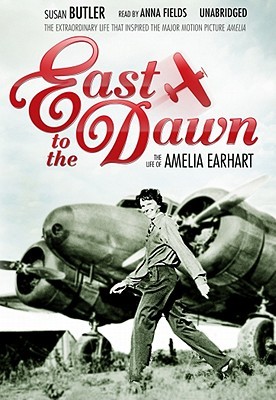 Publisher's Blurb:
Amelia Earhart captured the hearts of the nation after becoming the first woman to fly solo across the Atlantic in 1928--and her disappearance on an around-the-world flight in 1937 is an enduring mystery. The image we have of Amelia Earhart today--a tousle-haired, androgynous flier clad in shirt, silk scarf, leather jacket, and goggles--is only one of her many personas, most of which have been lost to us over time. Through years of research and interviews with many of the surviving people who knew Amelia, Susan Butler has recreated a remarkably vivid and multifaceted portrait of this enigmatic figure. Listeners will experience Amelia in all her permutations: not just as a pilot but also as an educator, a social worker, a lecturer, a businesswoman, and a tireless promoter of women's rights. We experience a remarkably energetic and enterprising woman who battled incredible odds to achieve her fame, succeeded beyond her wildest dreams, and yet never lost sight of her beginnings, ensuring that her success would secure a path for women after her. This richly textured biography is the perfect complement to the 2009 film Amelia, starring Hilary Swank, Richard Gere, and Ewan McGregor.

My Review:
This was a fascinating story, once we got past the requisite exposition of Amelia's family antecedents. I in fact had no idea of much of anything about this remarkable woman aside from her role as a pioneering female pilot, and her eventual loss at sea while flying around the world (and even for that, my mental image had her lost in the wrong ocean).

In many ways, Amelia seems a bit unfocused. As she enters adulthood, she can't quite grasp what she wants to do--though much of her seeming instability of purpose is a combination of shortage of funds and a tendency to run up against the obstacles placed in the paths of ambitious women in the early 20th Century. In fact, I gather from the book that she herself was pulled two ways by her need for a serious and useful career--and her love of fast cars and fast airplanes. So maybe she was an adrenaline junkie, not ADHD.

What was cool to figure out was that in spite of flying being where her fame was located, Amelia's real importance is as a social worker and above all as an advocate for women's rights. She spent much of her life fighting against the injustices of "women can't do that," and even her flying was as often as not in the service of proving the nay-sayers wrong.

The book is well-written, though I would have spent less time on the generation before Amelia and maybe moved faster through her early childhood as well. But it is clear, and aside from some issues with keeping a lot of characters straight (always a problem with audio books, especially non-fiction), was easy to follow. The narrator was excellent, which is to say, I hardly noticed it (except, I think, for one Seattle-area mispronunciation, which I can no longer recall).

My Recommendation:
Well worth reading/listening to. I'll bet the printed book has lots of photos that I didn't get to see, so it might be worth getting and reading that.

FTC Disclosure: I checked East to the Dawn out of my library, and received nothing from the writer or publisher for my honest review. The opinions expressed are my own and those of no one else. I am disclosing this in accordance with the Federal Trade Commission's 16 CFR, Part 255: "Guides Concerning the Use of Endorsements and Testimonials in Advertising."
Posted by Rebecca M. Douglass at 12:00 AM