Okay, first off, I know it's not Friday anymore. The Ninja Librarian is leading a rather chaotic life just now, and that's just the way it is.

So, sort of a story, sort of a photo thing, mostly just me rambling about what we did for the 4th of July.

We'd been working on the house like crazy all day because we had the cleaners coming Friday and needed to clear the way for them to clean. At dinner time I realized we didn't really have anything for dinner, so I ran down to the store on my bike (as usual). I was starting up the hill toward home when I overtook a couple of heavily loaded bike tourists. It was pretty late and a long way to camping, so I asked where they were heading. The answer: "I'm not sure. I guess Half Moon Bay."

Quick calculation on my part, and I pointed out it was 30 miles (and now about 6:45 p.m.). So I did what I've long said I'd do someday: I invited the cyclists home. They turned out to be a couple of young Germans doing the coast plus. They'd just finished criss-crossing the Sierra several times and taken the train from Bakersfield, then transit to the station in our town. (Note: we had recently learned about Warmshowers.org, but hadn't signed up because we are moving. If you are interested in meeting interesting travelers, check it out).

After we ate our burgers, corn on the cob, and ice cream (4th of July, remember?) we all 6 rode our bikes up nearby Mt. San Bruno to watch the fireworks.

After that we descended to where we could actually see the fireworks on the SF waterfront, and hear those from all over the Bay.

Back at the house and thawed out, we gave Julia and Christoph a place to sleep (not *quite* on the floor, but close, things at our house being as they are just now), and saw them off the next morning. 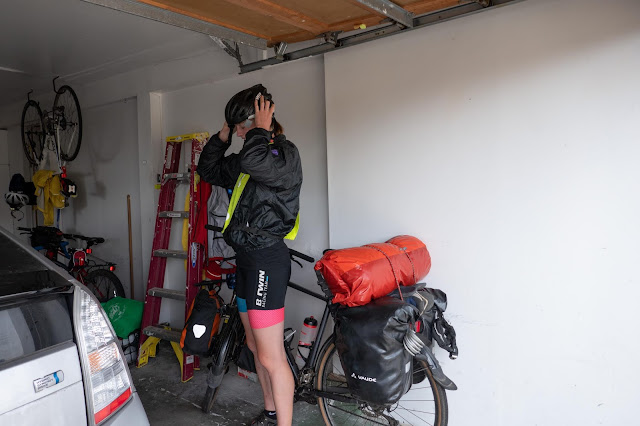 We will definitely be participating in Warm Showers in the future, when we have a home again!

Now, in further news, just because: after 40+ years, I cut my hair. All the way.

And that's all the news from the Ninja Librarian!