YA Review: Going Over, by Beth Kephart 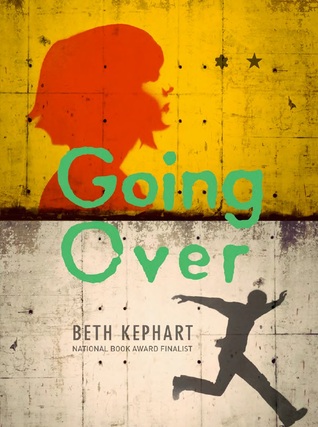 Publisher's Summary:In the early 1980s Ada and Stefan are young, would-be lovers living on opposite sides of the Berlin Wall--Ada lives with her mother and grandmother and paints graffiti on the Wall, and Stefan lives with his grandmother in the East and dreams of escaping to the West.

My Review:  I debated about how to classify this book. I found it in the juvvy section of my library, but I hadn't read very far before I realized that it fits much more in what I consider YA. It's not so much that there is a love story at the heart of it, as that there are too many "adult situations" as they say. There is a pregnancy, a strongly implied rape, spousal abuse, and a lot of death as well. Nor are the politics behind the story all that easy to understand. So: YA. Not for children.

That taken care of, this was a good book. It highlights a part of history that doesn't get a lot of attention--the Cold War division of Berlin into East and West, and does it in the context of a couple of young people who mostly just want to live their lives. The story is strong and plays out well. In a way, this could be another in the series of books I've read this summer about kids dealing with death and loss. These young people have lost all sorts of family through death or separation, and it has certainly affected their lives, though that's not what the book is primarily about. Or maybe it is: maybe what drives them so strongly to be together is the need to not lose one more person they love to that wall.

The writing is strong, but I did have some issues. The book is told in alternating sections between Ada and Stefan. Ada's sections are written in the 1st person, present tense. Sefan's are written in 2nd person, a voice that is always difficult, and which causes most of my issues. Ada manages to keep her present tense straight, I think, but Stefan's sections are not always strong. Here and there the voice slips, losing the 2nd person. And, of course, the question always hovers (for me, anyway) as to whom exactly is being addressed when the narrator says "you." It appears to be Stefan, but that doesn't always feel right. I think the intention is to make the reader feel more a part of the story, to feel what it is to be trapped in East Berlin. It almost works.

My Recommendation:
This is a good read, and not long. I think it's worth it for the sake of the history as well as the story, but in my opinion isn't appropriate for kids under 13 or 14.

FTC Disclosure: I checked Going Over out of my library, and received nothing from the writer or publisher for my honest review.  The opinions expressed are my own and those of no one else.  I am disclosing this in accordance with the Federal Trade Commission's 16 CFR, Part 255: "Guides Concerning the Use of Endorsements and Testimonials in Advertising."
Posted by Rebecca M. Douglass at 12:00 AM