Non-Fiction Review: Wild Sex: The Science Behind Mating in the Animal Kingdom 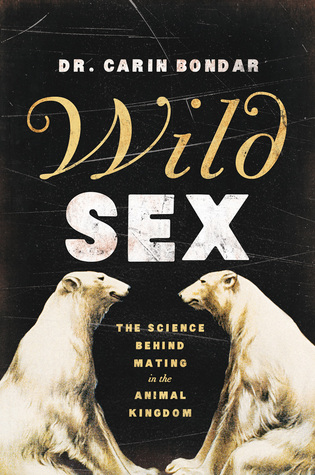 Not a children's book!

Publisher's Summary:
Birds do it, bees do it — every member of the animal kingdom does it, from fruit flies to blue whales. But if you think humans have a tough time dating, try having to do it while being hunted down by predators, against a backdrop of unpredictable and life-threatening conditions. The animal kingdom is a wild place – and it’s got mating habits to match. The sex lives of our animal cousins are fiendishly difficult, infinitely varied, often incredibly violent — and absolutely fascinating.

In Wild Sex, Dr. Carin Bondar takes readers on an enthralling tour of the animal kingdom as she explores the diverse world of sex in the wild. She looks at the evolution of sexual organs (and how they’ve shaped social hierarchies), tactics of seduction, and the mechanics of sex. She investigates a wide range of topics, from whether animals experience pleasure from sex to what happens when females hold the reproductive power. Along the way, she encounters razor-sharp penises, murderous carnal cannibals, and spontaneous chemical warfare in an epic battle between the sexes.

The resulting book is titillating, exhilarating, amusing, petrifying, alluring — and absolutely guaranteed to make you think about sex in a whole new way.

My Review:
Well, there I was, sorting books at the library, and I found myself holding this book. I had to take it home and see what it had to say, especially given those obviously smitten polar bears on the cover. Besides, I've stumbled on interesting tidbits about amour among various creatures over the years, and wanted to see what I could learn, and if there was anything more unnerving than banana slugs, who mate for hours--sometimes with both parties serving as both male and female--and can get stuck so that they have to gnaw off their male parts in order to separate. It doesn't get any weirder than that, right? (Note: it does). All of which is to say, I had some idea what I was getting into with this book.

And did it deliver? I would have to say: yes, but. The book is jammed with interesting facts about all aspects of mating in many different species. But I at times felt like I was reading a whole lot of one or two paragraph "oh wow" pieces, not a single coherent work that was building to a greater understanding of something. And yet (how many other hands do I have?), in the end, the book does leave the reader with a greater understanding of the biological side of sex.

I think it also raises, but doesn't explore, the question of whether the human relationship to sex is unique (and possibly what sets us aside from other animals). It seems easy to say that we are the only animals who indulge in sex for fun, not for biology. But Dr. Bondar cites many cases where animals seem to do likewise--even though she then provides plausible evolutionary reasons for the behavior, which force me to ask if it's really for fun. Part of the problem is that she falls into the trap of referring to evolutionary forces as though they were deliberate choices, and vice versa.

At times in the middle of the book I felt it was a little less substantial than I would like, but in the end, it certainly left me with food for thought.

Recommendation:
For adults (older teens at the youngest due to graphic descriptions of all kinds of sex) who are curious about the evolutionary history and biological efficacy of sexuality.

FTC Disclosure: I checked Wild Sex: The Science Behind Mating in the Animal Kingdom out of my library, and received nothing from the writer or publisher for my honest review.  The opinions expressed are my own and those of no one else.  I am disclosing this in accordance with the Federal Trade Commission's 16 CFR, Part 255: "Guides Concerning the Use of Endorsements and Testimonials in Advertising."