Today we are fortunate not only to have a great read to review, but author Leslie Nagel has stopped by with a guest post! Read on for my review and her post.


In a charming cozy mystery series debut, Leslie Nagel’s irrepressible small-town heroine finds that her fellow mystery book club members may be taking their Agatha Christie a bit too literally—and murder a bit too lightly.

Charley Carpenter has poured heart and soul into her clothing store, Old Hat Vintage Fashions. She’ll do anything to make it a success—even join the stuffy Agathas Book Club in order to cultivate customers among the wealthy elite of Oakwood, Ohio.

Although mixing with the most influential women in town has its advantages, Charley finds the endless gossip a high price to pay. But after two women with close ties to the Agathas are brutally murdered, everyone falls under threat—and suspicion. When key evidence indicates that both murders are the work of the same hand, Charley realizes that the killer has arranged each corpse in perfect imitation of crime scenes from the Club’s murder mystery reading list. She uses her membership in the Club to convince Detective Marcus Trenault to use her as an inside informant. Not that he could stop her anyway.

Intelligent, fearless, and every bit as stubborn as Marc is, Charley soon learns the Agathas aren’t the only ones with secrets to protect. Passions explode as she and Marc must race against time to prevent another murder. And if Charley’s not careful, she may find herself becoming the killer’s next plot twist.


The Book Club Murders is a good mystery with a solid dose of romance. Charley is an engaging heroine, neither too perfect nor too flawed, and I found myself liking her. I could sympathize with her attempts not only to engage with the "wealthy elite" (which whom she is not comfortable), but actually to like them, not just use them.

The romance element of the book teeters on the brink for me--I'm not a fan of romance-novel predictability, and there is some of that in Charley's relationship with Marc (they start out with an apparent strong dislike of each other, and Charley matches this dislike with a powerful physical attraction, another romance trope that kind of bugs me). In the end, I'm okay with how it plays out, as it works well in the story. Certain moments teeter on the brink of too graphic for a cozy, but again are brought up just in time.

The mystery itself is very well put together. I was aware that Charley and the police were going astray, but didn't figure out whodunnit until too late, being distracted (as no doubt intended) by another good candidate. The most dubious part of the mystery is the way in which Charley is allowed to work with the police. It is made to seem inevitable--she has something to offer that they can't do themselves--but I'm still a little skeptical. [As an aside, why is it easier to believe in a total loose-cannon amateur sleuth than in one who works with the police?]  I do like that this cooperation allows the author to avoid the bumbling-police (or nasty-cop) meme all too common in cozy mysteries. I prefer to treat law-and-order with a bit more respect, and she does.

The book is well-edited, and I was not aware of any issues of proofing or formatting.


Recommend for fans of the not-too-cute cozy mystery. Charley's business (her vintage clothing shop) plays into the mystery, but the book isn't bogged down in cute crafty things. So this reads well even if, like me, you aren't interested much in clothes. The Ninja Librarian says check it out. 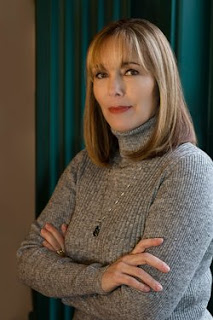 Leslie Nagel is a writer and teacher of writing at a local community college. Her debut novel, “The Book Club Murders”, is the first in the Oakwood Mystery Series. Leslie lives in the all too real city of Oakwood, Ohio, where murders are rare but great stories lie thick on the ground. After the written word, her passions include her husband, her son and daughter, hiking, tennis and strong black coffee, not necessarily in that order.

And now, here's Leslie Nagel with a discussion of what it takes to bring a book like The Book Club Murders to happy readers like me.


By the Numbers: A Beginner’s Guide to Getting Published

As a debut author, the question I hear most often is: “How did you get your book published? Is it hard to do?” Great question. With the explosion of digitally downloadable books and the shift away from brick and mortar book stores, getting that first publishing deal is tougher than ever.

No matter how good a writer you are, it’s no longer enough to have an intriguing story, a cast of engaging characters or a unique setting. You’ve also got to have the patience of a saint, the endurance of a long distance runner, and the stubbornness of a wide awake toddler at bedtime. So for those inquiring minds who want to know, here, in brief, is my by-the-numbers journey from that first keystroke to the release of my debut novel, The Book Club Murders.

150,000
I completed my Masters in Education in May 2010, with an eye to pursuing a long deferred dream of changing careers from marketing to teaching middle school. Unfortunately, the economy was sagging and no one could get a school levy passed. Since I couldn’t find a full time job, I began teaching English part time at a local community college. A couple of sections of Comp II kept me off the streets but didn’t fill my calendar. With time on my hands I began the first draft of a story idea I’d been kicking around for years, a mystery about desperate housewives, a dysfunctional book club, and a stubborn redhead with a flair for detection. I began writing during the Thanksgiving holiday break and completed a first draft in late January of 2011.

The problem? I had no idea what I was doing. Sure, I knew the mechanics of plot arcs, exposition and character development. I’ve read thousands of mysteries and thrillers; certainly I was an expert in what makes a good page turner. What I failed to do was a single jot of market research. What was selling? What were the rules defining genres? Most importantly, what were the guidelines for word count?

Adrift in a happy sea of ignorance, I hammered away. Every imagined encounter between any of my characters went onto the page. Every possible dialog, miles of back story, reams of description, away I churned. It felt so damned good. It had been years since I’d experienced the writing rush.

141
I spent the next few months slashing and burning, managing to trim the book down to 110,000 words. Sadder but wiser, I first researched the proper methods for acquiring an agent and then began querying in earnest in March 2011.

Between that first attempt and a joyous day in May 2014, I queried 141 agents. Those were a long 3 years. Most of those letters went unanswered or elicited a form rejection. But lucky for me, a handful of generous spirits responded with reasons why they were rejecting me. I devoured those comments, using every particle of advice to further trim and reorganize my rambling novel. I wish I could buy those lovely people a coffee and tell them how much their few words helped me. After dozens of disappointments, and having found at last the tidy house within my messy mansion, I signed with the amazing Curtis Russell at the even more amazing PS Literary Agency. Success tasted sweet, but my work was just beginning.

21
My agent took me on with the proviso that I be willing to do yet more revision. Seriously? Bring on the constructive critiques, please. His insights helped me clarify and crystallize all the problems still inherent in my book. Another massive overhaul involving the removal of yet more characters and extraneous crap got me down to 80,000 words and 30 chapters.

Curtis began submitting the manuscript to a handful of publishers in October 2014. These rejections were wonderful, because they nearly all came with loads of specific comments about what wasn’t working. The verdict? My book was still floating between genres, part soft boiled, part cozy, with a smattering of police procedural. The answer? Keep it cozy, of course. Another revision down to 78,000 words, more submissions, and FINALLY an offer! We signed a three-book deal with Random House Alibi in December 2015, with a release date of Book One in September 2016.

95%
It’s all about mobile devices these days. Genre fiction—romance, historical novels, fantasy, thrillers, westerns, the many subsets of the mystery world—we all know they’re more popular today than ever before. But did you know that 95% of all genre fiction is purchased digitally, either in ebook or audio format? That breathtaking statistical reality is driving the creation of digital imprints such as Alibi. New books from new authors like me are almost always published digitally now. If we catch on (fingers crossed!), then we might get a paperback release. Catching on depends heavily on social media, like the blog page you’re reading right now. Without the many lovers of books who write about reading and the people who love to read, new authors wouldn’t stand a chance. Thank you, most humbly.

So, let’s sum up. From the time the first word hit my laptop screen in November 2011 until The Book Club Murders release date of September 27, 2016, that’s—Whoa.
4 years 11 months.

Thanks for coming by and sharing your story, Leslie!

FTC Disclosure: I was given an electronic review copy of The Book Club Murders as a participant in this tour, and received nothing further from the writer or publisher in exchange for my honest review.  The opinions expressed are my own and those of no one else.  I am disclosing this in accordance with the Federal Trade Commission's 16 CFR, Part 255: "Guides Concerning the Use of Endorsements and Testimonials in Advertising."