(The Ninja Librarian knows this post is late. It's been that kind of summer in Skunk Corners). 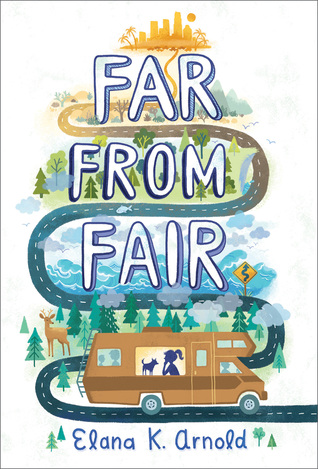 Publisher's Summary:
Odette has a list: Things That Aren’t Fair. At the top of the list is her parents’ decision to take the family on the road in an ugly RV they’ve nicknamed the Coach. There’s nothing fair about leaving California and living in the Coach with her par­ents and exasperating brother. And there’s definitely nothing fair about Grandma Sissy’s failing health, and the painful realities and difficult decisions that come with it. Most days it seems as if everything in Odette’s life is far from fair but does it have to be?

With warmth and sensitivity Elana Arnold makes difficult topics such as terminal illness and the right to die accessible to young readers and apt for discussion.

My Review:
At first, I didn't think I was going to like this book, because at first I really didn't like Odette. She is whiny and complaining about the changes in her life, with no interest in adventure and no sensitivity to what her parents are dealing with. As the story went on, though, I realized a) that she is a pretty typical 11-year-old (which is still pretty annoying), and b) she has a chance to redeem herself. So that saved the book, mostly, and in the end I didn't hate Odette.

That said, I wasn't wild about the book. Too much of it was taken up with Odette's self-absorbed complaints, and that got old. The issues of right to die and dealing with terminal illness, as the publisher says, are handled pretty well (again, from the perspective of an extremely self-centered 11-year-old; I have to say that I know many children that age who are a great deal more capable of thinking about people other than themselves). But the main focus of the story still feels like it's Odette's resentment about being uprooted, a single note that simply can't carry the story.

Recommendation:
I give this one a lukewarm recommendation, and credit mostly for being an okay "issues book." That, and the road trip is kind of cool, or maybe just fun for me because they go up the West Coast, visiting places I know, some pretty well (including Orcas Island, where they end up).


FTC Disclosure: I checked Far From Fair out of my library, and received nothing from the writer or publisher in exchange for my honest review.  The opinions expressed are my own and those of no one else.  I am disclosing this in accordance with the Federal Trade Commission's 16 CFR, Part 255: "Guides Concerning the Use of Endorsements and Testimonials in Advertising."


Final week for the 99 cent special on Halitor the Hero!