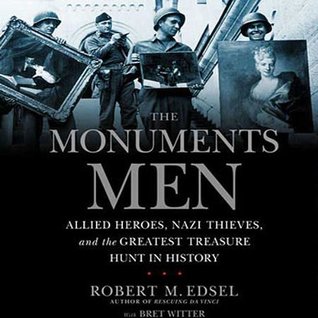 Publisher's Summary:
t the same time Adolf Hitler was attempting to take over the western world, his armies were methodically seeking and hoarding the finest art treasures in Europe. The Fuehrer had begun cataloguing the art he planned to collect as well as the art he would destroy: "degenerate" works he despised.

In a race against time, behind enemy lines, often unarmed, a special force of American and British museum directors, curators, art historians, and others, called the Momuments Men, risked their lives scouring Europe to prevent the destruction of thousands of years of culture.

Focusing on the eleven-month period between D-Day and V-E Day, this fascinating account follows six Monuments Men and their impossible mission to save the world's great art from the Nazis.

My Review:
An incredible story, and very well told. We get enough of the background of individuals to make sure we are invested, but the focus remains on the task the men and women accomplished, which is where the real interest lies. This is a piece of WWII history that I didn't know about, though I had been aware of Nazi looting of artworks. I hadn't realized how close many had come to being destroyed (or how many were, in fact, lost).

The focus of the book is, as it should be, on the art and the quest, but the author has managed to mold this into some gripping story lines. We do come to care about the men and women who fought to save the art, as well as the art they were fighting for. The epilogue that followed up on what happened to all the main players felt somewhat hasty. It read kind of like a list; perhaps the author shared my feeling that it didn't much matter.

The narration was a little rough, and I found the reproduction of accents in the reproduced dialog to be a decidedly false note. With so many characters and story lines, it would have been better to read it on the page, where it's easier to keep track, and to see when the story shifts from one to another.

Recommendation:
If you have any interest in art or in WWII, read this, but get the book, not the audio version. For one thing, it has helpful additions like maps and a list of characters! The story has also been made into a movie; I have not seen that and cannot comment on it.

Full Disclosure: I checked The Monuments Men out of my library, and received nothing from the writer or publisher in exchange for my honest review.  The opinions expressed are my own and those of no one else.  I am disclosing this in accordance with the Federal Trade Commission's 16 CFR, Part 255: "Guides Concerning the Use of Endorsements and Testimonials in Advertising."