Today, I'm doing two books at once. I listened to the audio back-to-back, repeating the first book, which I read several years ago, in order to have the context for the second book. 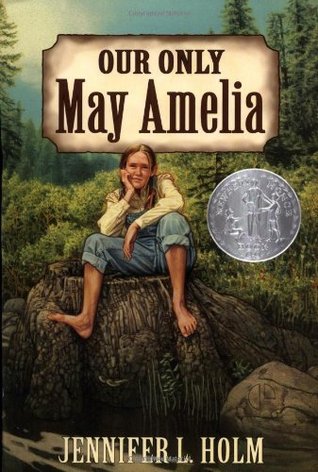 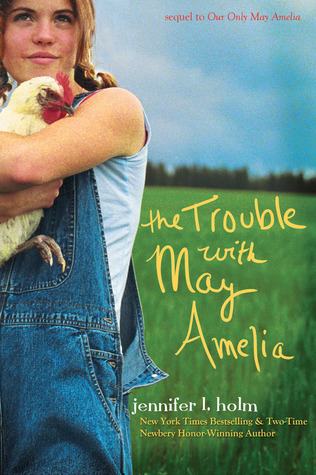 Titles: Our Only May Amelia and The Trouble with May Amelia
Author: Jennifer L. Holm; read by Emmy Rossum & Maria Dalbotten, respectively.
Publishers: Harper Collins 2001, and Atheneum, 2011. Audio editions by Listening Library, 2007 and 2012.
Source: Library
Summary:
Our Only May Amelia: May Amelia struggles along as the only girl in the whole pioneering settlement along the Nasel River in Washington State. Having seven brothers doesn't help, nor does the fact that in spite of all this, everyone somehow expects her to be a  proper young lady. But she's looking forward to that changing, with the birth of a new baby in the family! It might even be enough to compensate for Grandma's moving in with them.
The Trouble with May Amelia: A year along, or thereabouts, May is still struggling with expectations for her, and her father's belief that girls aren't good for much. When he pick her to translate for him when an agent comes calling, May's excited to prove her worth. When things go bad, though, she's the one in trouble, and the whole family is in danger of coming apart unless she can find a solution.
Review:
First off, the audio versions were both excellent. Both readers did a good job, in a very similar fashion--in spite of listening one right after the other, I had to check to see that there were different readers.
I enjoyed these stories. I like historical fiction, and I like tales of settling the American West, and in this case, it was even about my home state (Washington), though a part of the state I've not much visited. Still, I am always amazed that anyone managed to stick it out there through even one dark, soggy winter back before the days of central heating!
Despite the ten-year gap between when Ms. Holm wrote the first and second books, they hang together well, and the characters seem consistent. I like May Amelia for being a tomboy, and sticking to that. She doesn't convert to girliness in order to win her father's respect--she fights her way to that by a harder route. I like the mix of maturity and childishness that characterizes May Amelia and the younger boys. It struck me as being about right--kids had to take on responsibility under those conditions, but it didn't stop them being kids, and having fun (or skiving off from work, for that matter).

Recommendation:
The stories are engaging as stories, and the author's understanding of the setting makes them better. I recommend the books to anyone from about age 9 up (there are some things that may be hard for younger kids to deal with) who likes to read about how people lived in other times and places. Or, for any girl who struggles with expectations of what a girl "ought" to do and be.

Full Disclosure: I checked both books out of my digital library, and received nothing from the writer or publishers in exchange for my honest review.  The opinions expressed are my own and those of no one else.  I am disclosing this in accordance with the Federal Trade Commission's 16 CFR, Part 255: "Guides Concerning the Use of Endorsements and Testimonials in Advertising."