Our recent rain (something rare enough here this winter to cause rumination) made me think about another wet February weekend, when we went out to camp at Pt. Reyes National Seashore. We have actually done that a few times, and many dayhikes there, as well as a couple of epic bike rides (including one where we did the last 10 miles in the dark, with one working headlamp for two of us, and temps dropping to the low 40s). I thought I'd share a few cool facts about the park--part of our National Park system--and some pictures to show how much fun camping and hiking can be, even in the rain.

The Scoop:
The Park is 71,000 acres of Marin County, California, and almost all of it lies not on the North American Plate, but on the Pacific Plate. Go back far enough, and Point Reyes was off Los Angeles. . In any case, the San Andreas fault separates it from the mainland, and is the reason for the long inlet called Tomales Bay. The park is big enough and wild enough to have black bears, as well as a thriving tule elk population (though I've only ever seen the latter), as well as marine mammals including elephant seals. Woods, mountains, seashore, waterfalls, and a lighthouse are some of the features.

The Camps:
The park has 4 campgrounds--and you have to hike to all of them. In February of 2010, we decided to celebrate my husband's birthday by hiking to Coast Camp for the night. We had camped at Sky Camp when the boys were very little, because we could push the jogging stroller up there, but decided the beach would be nice this time.

We got a very late start, and picked up our permit about 30 seconds before the Visitor's Center closed at 5 p.m., so made camp after dark. It was, at least, dry then. Next morning, things didn't look so dry.

By the time we'd had breakfast and packed up, the rain had started. On with the rain jackets and pack covers!
Having approached by the shortest route (a bit over a mile, I think), we determined to return via the beach, a two-mile walk.  All the photos from here out have water on the lens...
Once you are wet, a little extra exploration doesn't really change anything. When we saw what amounted to a slot canyon in the coastal cliffs, we had to explore. Yeah, a little muddy. What did it matter? 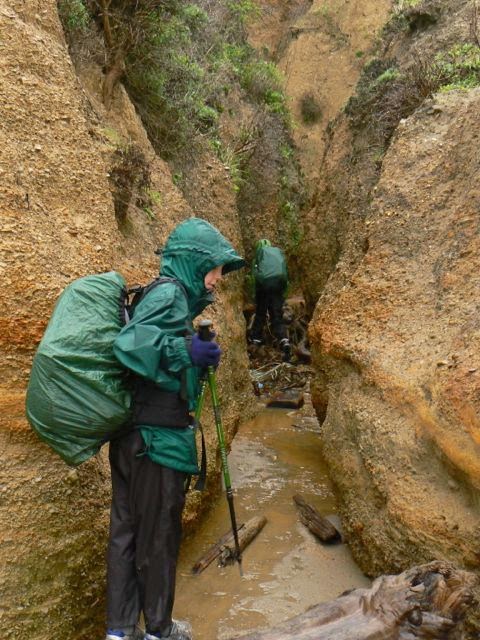 And at the end of the slot canyon, we found something cool:

It wasn't the first rain of the season. When we left the beach, the trail followed a stream inland. Unfortunately, the stream also had decided to follow the trail to the beach.
And because this is California, in the middle of February, there were flowers. Wild iris is one of my favorites.