Mystery Monday: Murder on the Rocks 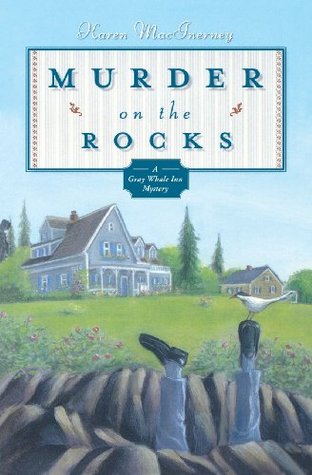 Summary:
Natalie Barnes has just bought an old house and opened the Gray Whale Inn on Cranberry Island on the Maine coast.  Now her inn and her livelihood, as well as that of the local terns, is threatened by a developer who wants to make a giant luxury resort on the island.  When the developer turns up dead, the police are looking hard at Nat, and she is determined to clear her name, stop the development, and find out who really killed the louse.

Review:
I really enjoyed this one.  Nat is an engaging heroine and a good narrator (just that little bit untrustworthy, in ways that we can see through and laugh about).  Her determination to solve the crime herself, rather than trusting the police, is made believable due to the combination of the investigating officer's incompetence and his determination to fix the crime on her.  This logic is complicated by the fact that the Island's deputy is on her side, but since he has no authority in the case, he can't do much--except be obliged to report anything she tells him.

The mystery is pretty well constructed.  Though I had inklings early on, the author sufficiently distracted me with red herrings to make me forget my doubts, so that the ending was satisfying.  Personal relationships in the story build and develop and still leave lots of fun possibilities for future books.

I would say that this is a very promising start to a promising series.  Those who like cozies with food will appreciate that there are a half-dozen recipes in the back of the book, and that cooking is always Nat's go-to activity to comfort herself.  Recommended.

Full Disclosure: I borrowed  Murder on the Rocks  from my public library, and received nothing from the writer or publisher in exchange for my honest review.  The opinions expressed are my own and those of no one else.  I am disclosing this in accordance with the Federal Trade Commission's 16 CFR, Part 255: "Guides Concerning the Use of Endorsements and Testimonials in Advertising."
Posted by Rebecca M. Douglass at 4:00 AM