Lots of cool stuff coming up this spring

I have a lot of exciting stuff coming up in the next few months, both here on the blog and in the rest of life.  Well, not so much in life, except that trip to Tucson, AZ, for the Tucson Festival of Books (find me at the Children's Tent from 2-4 on Saturday, March 15.  Not that I'm advertising or anything).

In addition to, or sometimes in place of, the usual reviews and Friday Flash Fiction for the next two months, look out for these events:
In addition, in late February I'll be participating in a blog hop for The Orphan and the Thief, by M. L. LeGette, a middle grade fantasy that (based on the first two or three chapters) promises to be an exciting read!

And all the while I'm working on my next projects: major revisions for Halitor the Hero, my own middle grade fantasy (with tongue mostly in cheek), and the beginning bits of the third Ninja Librarian collection, in which we deal with the problem of Peggy, not to mention getting back to beating my NaNo novel, the sequel to Death By Ice Cream into sometime more like a book, called (at least for now), Death By Trombone.

So watch this space!

I'd like to finish with a hint at the new cover, or even some cute kittens, but I can't and won't.  Instead, I'll just use my favorite trademark, the post-hike ice cream frenzy: 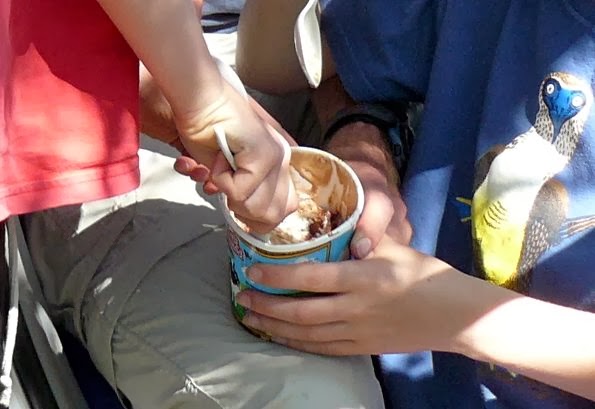