MG Review: Like the Willow Tree, by Lois Lowry 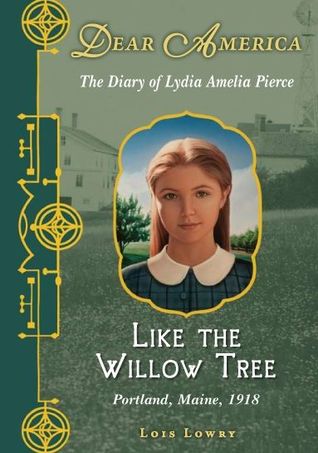 Summary:
This is a series familiar to most middle grade readers by now, I would guess.  The book is set up like a real diary of a girl from some interesting point in history, and like most recounts about a year.  Naturally, it's a pivotal year.  In this case, it is the year in which Lydia Pierce (11) and her brother Daniel (14) find themselves orphaned by the Spanish flu epidemic of 1918.  They must suddenly leave their home in Portalnd, Maine, and go to stay with their Uncle.  But he can't keep them--he has a large family and a poor farm, so he takes them to the Shaker community at Sabbath Day Lake.  Left in the orphanage at this unusual religious enclave, Lydia and Daniel have a lot of adjusting to do and a lot of learning.

Review:
When I first saw the "Dear America" books, I nearly dismissed them as a gimmick, the sort of poorly written stuff you get in anonymous series like the later Boxcar children or Nancy Drew.  But on closer inspection (the early "Diaries" didn't include the name of the actual author on the cover as I see this one does), I realized that they were written by established writers of children's fiction, and took a closer look.  What I found were good, well-written stories, whose only formula was the diary structure (which admittedly is a bit forced--what kid would ever record such detail and explain so much along the way?).  Each book ends with a section of historical notes and pictures, telling more about the place and time in which the story is set--a history lesson I'll bet many kids are eager to look at after reading the stories.

Like the Willow Tree was a good story, and gave some interesting insights into a bit of history and a culture that not many know much about.  I had a sense of dissatisfaction with it, however.  Some of that was due to my general reaction to the Shaker religion (well, maybe any religion, but these folk had some odd ideas and the approach felt rather cult-like).  Lydia comes too rapidly, in my opinion, to accept this radical change in her life and the beliefs she is being handed.  Maybe that's realistic for an 11-year-old who's been through a lot of trauma, but I would have been happy to see her rebel a little more.  Again, maybe that comes from my belief that it's pretty hard to be happy in a society that completely separates males and females and allows not so much as a word between them.

Another small quibble was that the uncle who brought them--and says he'll try to visit occasionally (and genuinely seems to care and mean it) simply vanishes from the story.  Unless I missed something, he isn't even mentioned in the "Epilogue", a feature of all the Dear America books in which the author summarizes the rest of the characters' lives.  Since I did this as an audio book it's possible I missed something there.

Ms. Davis did a good job reading, but I admit to having found her voice a little grating.  That's a matter of personal taste, however, and the audio edition did offer one thing the printed book can't--the Shaker songs Lydia includes in her diary are actually sung so that one hears the tunes and gets a feel for them.

Full Disclosure: I borrowed Like the Willow Tree  from my (online) library, and received nothing from the writer or publisher in exchange for my honest review.  The opinions expressed are my own and those of no one else.  I am disclosing this in accordance with the Federal Trade Commission's 16 CFR, Part 255: "Guides Concerning the Use of Endorsements and Testimonials in Advertising."