Mystery Monday: Away With the Fairies, by Kerry Greenwood 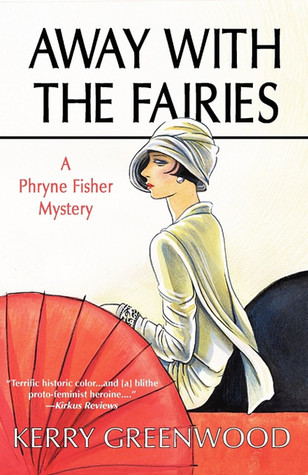 Have I ever mentioned how much I love my library?  Books all over the place, and free for the borrowing.  No risk if you don't like it, so try anything that catches your fancy!  And that was how I first read this book, which was the first of the series I read (if you can follow that: this book, which is #11 in the series, was the first of Greenwood's books I read).  I decided to re-read it after having read most of the preceding books, just to see what it felt like to see the story with the backstory in my head.

Summary:
Set in between-the-wars Melbourne, Australia, Phryne's latest adventure starts as a pleasant distraction from missing her lover.  Lin Chung is on a silk-buying trip to China, and investigating the death of a writer and illustrator of cloying fairy stories is a bit of amusement for the wealthy and unusual Phryne.  To learn who might have done the dastardly deed, Phryne takes a job at a women's magazine.  But the fun is taken from her investigations by the growing awareness that something very bad has been happening to Lin Chung.

Review:
This mystery is two mysteries, held together of course by the fact that it is Phryne (whose name is pronounced "Fry-knee") investigating both.  It's a tricky balancing job for an author.  Greenwood resists the temptation to make the two intertwine in any way; instead they continue to run in parallel.  It's up to the reader to track both and care about both.

That, of course, is the hazard: we inevitably care about one more than the other, and, like Phryne, we soon find ourselves more concerned about Lin Chung than about the murder of a woman who doesn't seem to have been as pleasant as her little fairy drawings would suggest.  This also leaves us (or Greenwood) with a problem, as the Lin Chung story is treated as a side story (this is, after all, a murder mystery).  Yet I felt like wrapping up that one was much more of an important denouement than was the unveiling of the murderer.  In all honesty, I just wasn't that concerned with the murder (much as Phryne herself must have felt, though she drags herself out of bed to tie up the loose ends--a real sacrifice, given that her bed is where Lin Chung is by that point).

On a final note, though I definitely count the Phryne Fisher books as cozy mysteries, they do have more sex in them than most cozies (at least one good bedroom scene per).  I'm not sure the scenes add much, though they are fun.  We are very much aware that Phryne is unashamedly a sexual being without ever setting foot in the bedroom--she exudes sexuality, and makes total, unabashed use of it when needed.  The level of detail on the reunion with her lover, while a very long way from erotica, is unnecessary, and some may find it distracts from the generally light nature of the book and the series.

Full Disclosure: I borrowed Away With the Fairies from my library, and received nothing from the writer or publisher in exchange for my honest review.  The opinions expressed are my own and those of no one else.  I am disclosing this in accordance with the Federal Trade Commission's 16 CFR, Part 255: "Guides Concerning the Use of Endorsements and Testimonials in Advertising."
Posted by Rebecca M. Douglass at 6:00 AM