Mystery Monday: Buried in a Bog 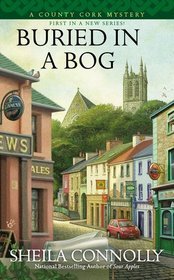 
Summary:
After the death of her Grandmother and only relative, Maura Donovan visits the tiny Irish town where Gran grew up.  Gran wanted her to, and saved the money for it, and Maura doesn't have a life anyway, so she goes to take a look.  Once there, one thing leads to another until she finds herself working in the local pub, staying on longer than intended, and discovering a raft of relations she never knew she had.  She also finds herself involved with two corpses, one nearly a century old, the other fresh.  By the time she's done, she knows more than she wants to about both deaths, and find out just what family is.

Review:
This is a nice story, and I enjoyed the characters (though I did kind of want to shake Maura, especially at first.  Ignorant youngster!).   But I can't say I found it much of a mystery.  There are, indeed, two corpses, though one is old enough to be almost historic.  And Maura is instrumental in solving both deaths.  But something felt off, and I think it was that the mystery was too far secondary to the story of finding a family and a home.  Nor was the conclusion any great surprise to me.  However, I enjoyed the story enough to give the series another chance--and/or to try the other series by the same author.  But I don't rate it very highly as mysteries go.  I far more enjoyed the Irish countryside and ambiance (Sullivan's Pub, in particular, felt laughably read), and there is no question that Ms. Connolly can write.  I hope she continues the series, and I hope she develops Maura more as an amateur sleuth and moves her away from being a hapless innocent caught up in things she doesn't quite grok.

Full disclosure: I borrowed this book from the  library and received nothing from the author or the publisher for this review.  The opinions expressed herein are my own and those of no one else.
Posted by Rebecca M. Douglass at 6:00 AM