Flash Fiction Friday: The Cat Did It.

Last week, Chuck Wendig challenged us all to come up with the first line of a story, one compelling enough to get our fellow Wendigos to choose to write the story.  This week, we wrote those stories.  I picked a line by "jebdarsh" which lent itself to my style (I don't have to tell you what the line was, since it's what?  The opening line!).   It wasn't an easy choice--there were several lines I could have run with, but this lent itself best to my kids' stories.

The Cat Did It


Now, I’m not saying the cat was plotting to kill me.  But.

It started with football practice.  I’m not really supposed to be there anyway, since no one thinks a girl should play football.  Mom says nobody should play football, and she was only letting me play as long as it was flag football.  That gave me one more year.  After that, the only options were to convince her I could play tackle ball or quit.  Maybe I could find a rugby team.  Bet Mom would love that!

But at practice last week, we were horsing around, tackling each other and wrestling and stuff, only I looked around and saw my cat.  He was just sitting on the sidelines watching us, but he wasn’t supposed to be there at all.  He’s supposed to stay in the house.  He raised a hind leg to wash his backside, and I started to turn toward him.  I meant to catch him and take him home so he wouldn’t get hit by a car.  I mean, I was trying to keep him safe, even though I don’t really like him.  But just as I turned, Jakob hit me.

I was all off balance and twisted up, so I fell and hurt my ankle.  By the time I finished yelling at Jakob, Boswell—that’s what Mom named the cat—was gone.  And Coach said my ankle might be sprained and he called Mom to take me to the doctor.  She had to leave work early and she chewed me out all the way to the hospital.

That finished my season, probably the last season of football I’d ever get to play, and I missed the last two weeks.  I was stuck with a taped-up ankle and a pair of crutches mostly good for whacking people.  Jakob was off the team for hurting me, too.  I thought that was pretty unfair, since he hadn’t meant to hurt me, and I’d actually started the rough-housing.  But I didn’t feel as bad about him as I did about me, because Mom said I wasn’t playing any more blood sports, whatever she meant by that.  She said I should learn to play tennis.  Tennis!  No way am I putting on one of those silly short skirts.

Then the cat started in.  Mom says poor Boswell just wants attention, but why does he have to come looking for it when I’m on the stairs?  He’d come and rub around my foot and my crutches, and Mom said he was just being a cat, and I needed to be careful.

I’ve always suspected him of wanting to do away with us all, if only he could figure out the can opener.  And yesterday he scored again.  I was pretty sure he’d managed to get my ankle sprained.  He probably had hoped I’d break my neck, but I’m pretty tough.  Anyway, it was definitely his fault I was hurt, sneaking out and over to the practice field and all.

But yesterday morning he got down to it and started really playing dirty.  He’d figured out that I wouldn’t start down the stairs if he was anywhere around, so he held off his attack until I was already halfway down.

Lucky for me, he waited a little too long.  I was only three steps from the bottom when he came out of Mom and Dad’s room like a furry lightning bolt, and flew down the stairs right into my left crutch, just as I was making the move from the third step to the second.

Boswell knocked that crutch out from under me, and bang!  Down I went.  Then he walked up to me where I was lying on the floor yelling, and gave me an evil look.  He said one loud “Meow!” then sat down and licked his butt in the most insulting way.  He stalked off when Mom came running.

Of course, Mom didn’t believe me when I said Boswell had done it on purpose.  She told me to be more careful, and brought me an ice pack for where I’d bumped my head, and another for my ankle because it was time to ice it again anyway.

Then she left me on the sofa and went off to work.  As soon as she was gone, Boswell padded back in and sat on his haunches and just looked at me.  I knew what he was thinking.  At one point he tried to dash up and lick my face.  I mean, ewwww!  I’d just seen what he used that tongue for!  I got my hands up just in time and shoved him away, pretty hard.

Every time I got up to go get a snack or pee or anything, he was right there underfoot.  Mom says he felt bad for hurting me and rubbing up against me was his way of showing his love, but I know better.  Cats don’t do remorse, and they love food, not people.

I’ve taken to whacking him some with my crutch, so he’ll stay away.  Mom got mad when she saw me do it, but I’ve taught Boswell I’m not going to go without a fight.    I’m just afraid he’ll manage to get into my room while I’m asleep.  He could smother me in my sleep and I’d never know it.  He’s always tried to sleep on my face.

I know he’s plotting to kill me, and I know why.

I’m just a practice run.  He and his cronies—I hear them all yowling about it at night, when Mom thinks he’s safely in his basket behind the dryer—are plotting to take over the world.  I saw Boswell with three neighbor cats yesterday.  They didn't’ see me looking out the window—I stayed out of sight behind the curtain.  But I saw them, and I know what they’re up to.

I’ve seen it.  The cat is plotting to kill me, and anyone else who won’t become the willing slave of catdom.  I’m guessing they’ll keep Mom around to run the can opener. 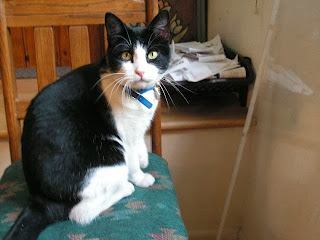