This week, Chuck Wendig didn't give us a flash fiction challenge, instead offering the suggestion that we share our first chapter of NaNo novels.  Since I choose never to inflict anything on my readers, even my blog readers, until it is edited at least once, and of a preference twice or maybe 15 times (whatever it takes, when it comes to my books), I chose not to participate.  Fortunately for me, as I cast about for a story, I received the following from the Ninja Librarian himself, just in time after a long silence!  Somehow Tom always knows when I need a helpful word.

But even before we get to that, please vote in the NEW title poll on the right side of the page.  I've taken my favorites from the titles suggested both here and on Goodreads, and am doing another round.


After my lengthy silence, I return to report to you about recent Halloween-related events in Skunk Corners, lest one of your informants provide you with an inaccurate account of the celebration.  Events of that evening did develop in a manner I believe you will find interesting, and I believe that only Alice and I know the full story, as befits the librarian and the teacher.

You may recall that on a previous Halloween we in Skunk Corners were visited by something presenting itself as a headless horseman and endeavoring to terrorize the good citizens of the town.  That proved a snare and a delusion, most especially for the unprincipled varmint who perpetrated the impersonation, though he spent far less time in constrained circumstances than I would have preferred.  This year, I kept a sharp lookout for any disquieting developments in Skunk Corners, lest  any neighbors, perhaps from Endoline or Pine Knot, might attempt something similar.

Nothing, however, seemed amiss in the days leading up to this most curious American holiday.  While the adults concentrated on the harvest and preparing the seasonal treats, the young folk of the town gathered together where they believed themselves free of adult supervision and laid their plans for mayhem.  None seemed to rise to any level in need of my attention, though of course I kept a close eye on their festive preparations.

Alice, she whom others in town choose to call Big Al, likewise reported calm in the school and the town, and began (on my recommendation) to read the works of Edgar Allen Poe.  We selected a few of the less horrifying works to share with her students.  “The Raven” they found a bit creepy, but it gave no one nightmares, not even the smallest children.  Al is very careful of her youngest charges.  “The Cask of Amontillado” even I chose not to read after dark.

Everything proceeded quietly.  Too quietly for my restless young friend.  The day before Halloween Alice and I ‘cooked up a plan’ of our own, as she phrased it in the local argot.  Assorted pranks having long been standards among the somewhat older children of the town, we thought it was it was our time to turn the tables on them in a new way.

The hardest part was managing to get our efforts completed after dark but before the young folk began work.  In the end, our fine Mayor, Mrs. Herberts, helped us all unknowingly, for she declared a town celebration, with soup and pie, to be held at Two-Timin’ Tess’s Tavern on Halloween night.  I suspect Alice of having been behind this idea, as she knew very few people in Skunk Corners, young or old, could resist a soup and pie dinner.  Even the most dedicated pranksters would be sure to be indoors for the serving of the pie.  Annie’s pies are worth going out of your way for.

So, in the early evening, while our townsfolk filled their bellies with good food and their souls with warmth and laughter, Alice and I lost ourselves in the crowd until we could slip out unnoticed.  Working hard, we finished in time to return and judge the pumpkin-carving contest.  First prize went to the elderly Miss Cornelia, who proved to possess a wholly unexpected talent for the conversion of squash into works of gruesome art.  I dearly hoped none of the small fry would have nightmares after viewing her lit pumpkin in the dim room.

Then we said our goodnights and went decorously off to our quarters in library and school.  Only, after a decent interval to allay suspicions, we crept back out rather less decorously to enjoy the fruits of our labors.

Everyone keeps a cow or two, of course, and generally at least one ends up on the roof of the railroad depot on Halloween night.  As a general rule, it is Archibald Skinner’s cow, for he is a most unpleasant man, and frequently chases the young folk from his property.  It does no harm to the cow, and gives the children a chance to exercise their ingenuity in concocting the means of elevating the bovine.

The other annual prank is, of course, the horizontal displacement of the house of comfort behind the bank.  What Alice refers to as “knocking over the Tolliver privy.”   Mr. Tolliver is a favorite of no one.

On this Halloween night, the young people divided themselves into two bands, desetined for barn and bank.  Soon we heard voices.

“Hey!  He’s moved his cows!  There ain’t no—what on earth?”  Alice nudged me in the ribs.  Someone had discovered that the cows were gone.  In their stead, tethered in place in the stalls, stood a pair of outhouses.  We’d had to borrow not only the one from the bank but also Mr. Skinner’s own, in order to match the number of cows to be removed.

About the same time, a loud whisper came from behind the bank.  “Hey!  What are these cows doing here?”  Soon the two groups of would-be pranksters came back together, with much laughter and indignation and smothered outbreaks of gaity, and appeared to own themselves outdone.  Smothering laughter of our own, Alice and I departed to our well-earned beds, assured of our own brilliance.

Imagine our surprise and chagrin in the morning.

There, behind the bank, lay two cows on their sides.

Atop the depot, proud and tall, stood the banker’s outhouse.

And on my doorstep, perhaps in homage or perhaps to say that they knew who was behind the swap, sat a gourd, carved in the perfect likeness of mephista mephista, or the common skunk.  I don’t know who carved it, but I can guess. 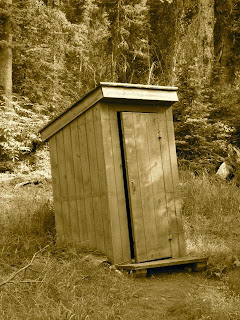